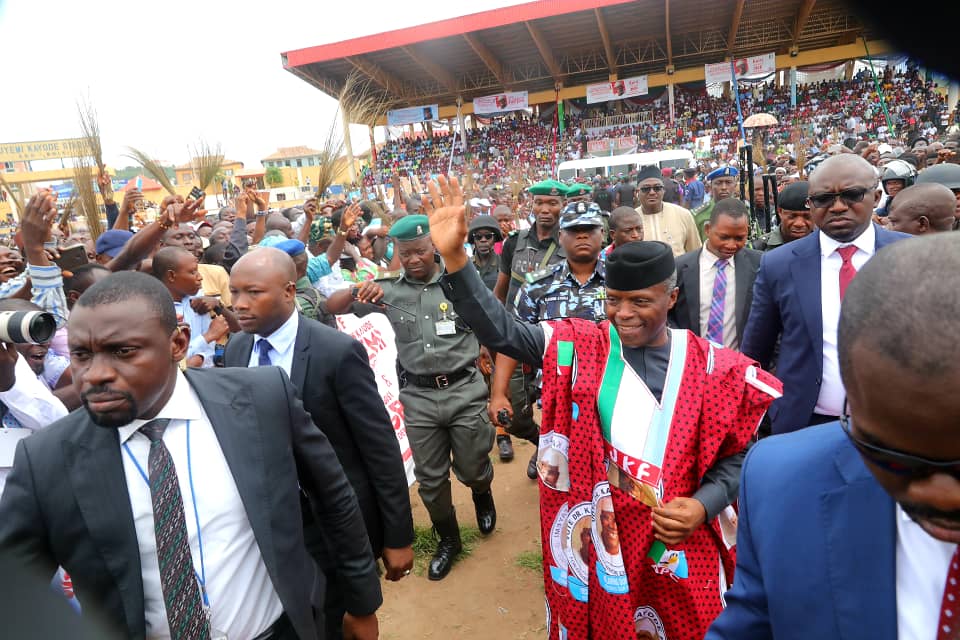 Vice President Yemi Osinbajo on Wednesday made a surprise return to Ekiti State, after his departure on Tuesday at the conclusion of the mega rally in support of the governorship candidate of the All Progressives Congress, Kayode Fayemi.

Mr Osinbajo had led a powerful campaign delegation comprising Bola Tinubu, John Odigie-Oyegun, Bisi Akande, Adams Oshiomhole and a host of other bigwigs of the APC in a bid to win the hearts of the citizens ahead of the July 14 polls.

The Peoples Democratic Party’s campaign had observed that the vice president left Ekiti State after the campaigns without paying homage to the traditional rulers of the state, particularly the Ewi of Ado Ekiti, Rufus Adejugbe.

The Kolapo Olusola Campaign Organisation (KOCO) said in a statement issued by its director of media and publicity, Lere Olayinka, that it was the height of disrespect for the traditional institution for Mr Fayemi to have told Mr Osinbajo that it was not necessary for him and other APC governors that came for his campaign to visit and pay homage to the traditional ruler of Ado Ekiti.

Mr Osinbajo returned to the state on Wednesday apparently to make amends and forestall the situation where the opposition would use it as a campaign attack against the APC candidate.

In his remarks, the vice president apologised for his inability to pay homage to the monarchs on Tuesday, citing an emergency assignment in Abuja.

He pleaded with the traditional rulers to support Mr Fayemi’s bid to be governor of the state after the July 14 polls.

The Chairman of the Ekiti State Council of Traditional Rulers and Oloye of Oye-Ekiti, Oluwole Ademolaju, while responding on behalf of the monarchs, said the traditional rulers would always support the government in executing policies that would make life easier for the masses.

He lauded the Buhari administration for various achievements recorded in office.

But the PDP has again reacted to the return of the vice president, saying it was an afterthought and an ineffective damage control measure.

“It is insulting for the APC and Fayemi to have disrespected our Obas openly yesterday, and now come back to secretly apologise to them today,” Lere Olayinka, the spokesman for the PDP campaign organisation said.

“We are also surprised that the vice president could allow Fayemi to dissuade him from paying homage to the traditional rulers.

“Most importantly, it is unexplainable for the vice president to have wasted public fund to come to Ado Ekiti twice within 24 hours just because Fayemi never regarded Obas in the State as worthy of being paid homage to.”