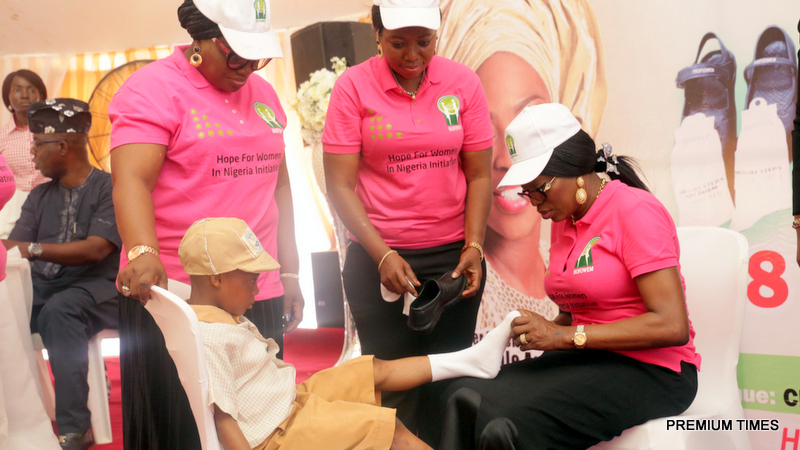 Wife of Lagos State Governor, Bolanle Ambode, on Tuesday commenced the distribution of 50,000 shoes and branded socks to primary one pupils of public schools across the state.

Mrs Ambode, in her remarks at the Cherubim and Seraphim Primary School, Ikorodu, where the project commenced, said the initiative, tagged “Project Bright Steps,” was to boost the morale of the pupils.

She said it was also to sensitise the society on the importance of the pupil’s welfare in getting the best out of them in their academic pursuits.

“We observed with pain, that many pupils were less than properly dressed to School, as some turn up in bathroom slippers, with many others barefooted.

“This sort of daily appearance for school activities certainly cannot guarantee them the desired self-esteem or confidence to excel in their academic work,” Mrs Ambode said.

She explained that it was in view of the above that the foundation settled on the mass procurement and distribution of shoes and socks to the pupils to prepare them for school.

Mrs Ambode urged the pupils to be serious with their studies and not make excuses of challenges and limitations.

“You can learn something new every day, if you listen attentively in class and with strong determination, you can overcome all barriers to achieve your desired dream.

“Keep your eyes on the stars and feet to the ground, do small things in great ways. It is about your attitude of mind,” Mrs Ambode said.

The governor’s wife said the exercise was an annual event aimed at touching as many pupils as possible in the public primary schools.

“HOFOWEM is hinged on hope, with focus on issues of children, women, widows, youths, aged women and the sick.

“It also carries out economic empowerment for youths, support for pregnant women and mothers of multiple births, among others,” she explained.

Earlier in her welcome address, Oyefunke Olayinka, the Chief Executive Officer of HOFOWEM, said that the programme was aimed at increasing school attendance by equipping pupils for school.

Mrs Olayinka said this would serve as a means of support for indigent parents who might find it difficult to provide the basic school needs required by their children and wards.

She commended Mrs Ambode for her love and care for children and to ensure that they have a secured future.

The initiative will be extended to other centres in Agege, Maryland, Yaba, Ojo, Amuwo-Odofin, Epe and Lagos-Island.

About 175,000 shoes and socks were distributed to all primary one to three pupils of public primary schools in 2016.