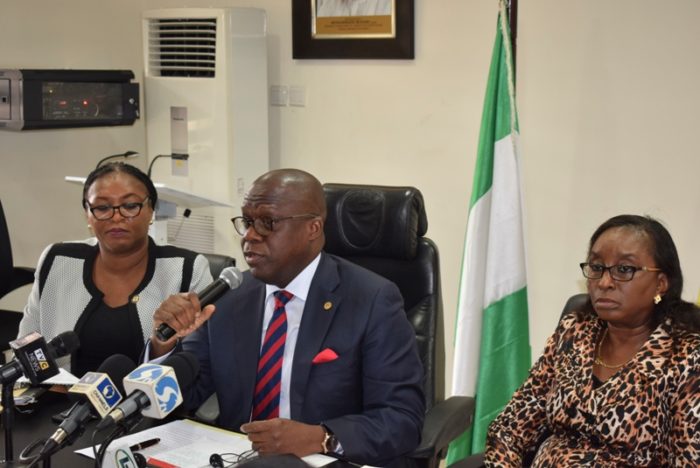 Lawyer accused of killing husband to be tried soon — Official

The Attorney General and Commissioner for Justice, Adeniji Kazeem has said that Udeme Odibi who allegedly stabbed her husband to death and severed his genital in Lekki, Lagos, would soon be tried at a State High Court for murder.

Mr Kazeem disclosed this at a news conference on Monday in Alausa, Lagos.

Mrs Udeme, a female lawyer is being accused of murdering her 50-year-old husband, Otike Odibi, at Diamond Estate, Sango-Tedo, Lekki, Lagos in a gruesome manner in May.

According to him, the Directorate of Public Prosecutions issued legal advice on the matter, stating that the available facts established a prima facie case of murder contrary to section 223 punishable by death and misconduct with regard to a corpse.

“Section 165 (b) particularly creates an offence of felony for cutting up or mutilating a human corpse just as we have in the deceased person. Facts available in file reveal that the suspect, subsequent to her stabbing her husband, mutilated his corpse by cutting his genitals.

“The suspect is therefore to stand trial before the High Court of Lagos for the murder of her husband and mutilation of his corpse. The trial of Udeme Odibi will commence as soon as the Chief Judge assigns the case to a court. This office will ensure expeditious trial of this matter,” he said.

Mr Kazeem also expressed dismay at the rising rate of domestic violence in the state. He cited the case of a Dane who allegedly killed his wife and child in Lagos.

“The good citizens of Lagos are enjoined to fulfill their role as compulsory reporters by ensuring that any case of domestic violence is immediately reported to the police, Domestic and Sexual Violence Response Team, DSVRT, or any other relevant authority to avoid unnecessary loss of lives,” he said.

The Attorney General also disclosed that the DSVRT commissioned a research on May 15 on domestic violence and mortality among intimate partners.

He also warned citizens engaged in any form of domestic violence to henceforth desist from such acts.

“Anyone found guilty will face the weight of the law, as government would not tolerate such behaviour and offenders are hereby warned accordingly,” he added.