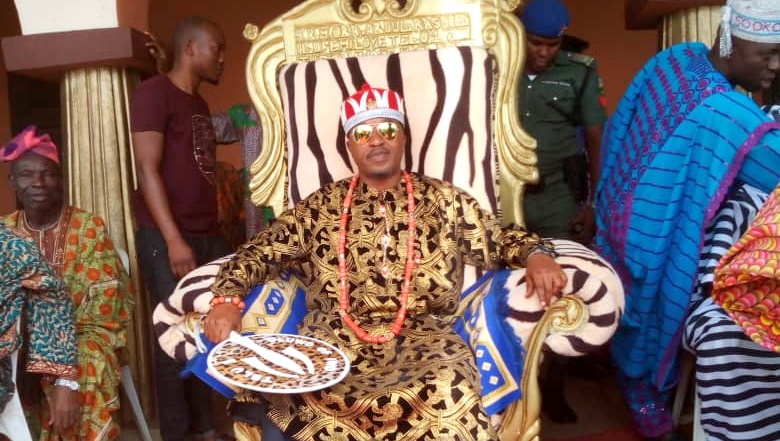 The Oluwo of Iwo, Osun State, Abdurasheed Akanbi, on Saturday doned customary Igbo dress as he installed an ‘Asiwaju of Igbo Assembly’ in his kingdom.

The monarch recently stirred controversy after he announced he would be taking a new title of ‘Emir (of Yorubaland)’, a title commonly used for monarchs in the Hausa/Fulani kingdoms in Nigeria’s north. He said he was attracted by the unity and decorum among the northern monarchs, saying the same could not be said of his fellow Yoruba monarchs.

Then, his action was widely condemned among the Yoruba in Nigeria’s west.

At Saturday’s ceremony, where he installed Martins Odumegwu the Asiwaju of Igbo Assembly, the moarch said he was motivated by the imperative of uniting Nigeria’s groups “as a father to the nation.” He asked his fellow monarchs to emulate him.

“I’m wearing Igwe dress to demonstrate my unrepentant insistence on the oneness of Nigeria as a father to the nation,” he said. “Nigerians should integrate through occasional multi-ethnic dresses. Other Obas need to adopt the system to promote unity.”

He continued: “The adoption of state of origin is a threat to our unity. Nigerians should be Nigerians in Nigeria. The certificate is divisive. As a Nigerian, you should be able to contest for elective positions anywhere in Nigeria. Ethnicity doesn’t permit this. Traditional rulers have role to play. I’m leading this and will continue.”

“Palace is a rallying point and general place for every Nigerian. It jumps the political, religious, ethnic and economic barriers. Everyone, irrespective of your location, should be able to approach any palace and make your request. Palace belongs to Nigerians, not a certain ethnic class.”

“Unlike mosque and church which Muslims and Christians have respective exclusive access to, palace should accommodate everyone whether you are Muslim or Christian, Yoruba, Hausa or Igbo.

“As fathers to the nation, we left no alternative than to make our palaces accessible to all Nigerians and be prompt in intervening in any brewing issue before escalating.”

Moses ruled out of World Cup