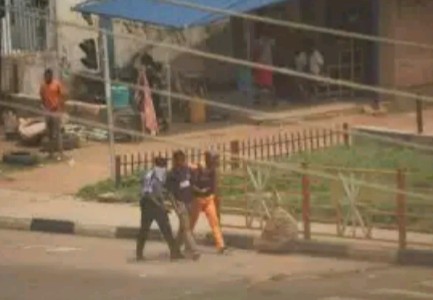 Many people were injured as police officers fired tear gas to disperse students of Adekunle Ajasin University in Ondo State protesting the over 500 per cent increase in their school fees.

The students were on a procession to the Government House, Alagbaka, Akure on the third day of their protest on Wednesday when they came under the attack, some of them stated.

One of the students, who identified himself only as Oluwadamilola, told PREMIUM TIMES that some market women who joined the protest were arrested with some of the students’ union leaders, including their president, Olawale Ijanusi.

“We were intercepted by policemen. Some protesting market women have been arrested and our union leaders. I escaped through the bamboo plantation beside the Government House,” he said.

“The police used tear gas which resulted in some of our colleagues being injured.”

Another source reported that 11 students sustained various degrees of injuries and were rushed to the hospital by their colleagues.

The market women had on Tuesday vowed to join the protest by the students.

On Tuesday, the state government said it increased the fees to raise funds to sustain the university.