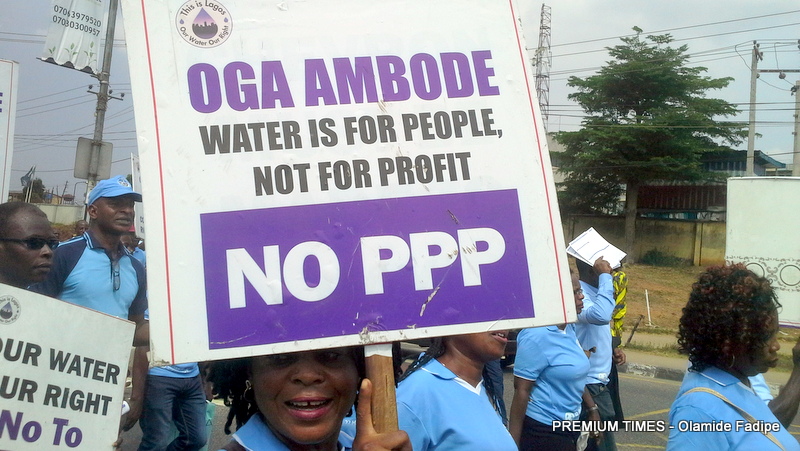 Several environmental and rights advocacy groups on Thursday marched to the Lagos House of Assembly to protest the planned privatisation of the state government-owned water corporation.

The Nigeria Labour Congress and some of its affiliate organisations including the Amalgamated Union of Public Services; Joint Action Front; as well other groups like the Labour, Health and Human Rights Development Centre; Center for Dignity; African Women Water Sanitation and Hygiene Network; and the Environmental Rights Action/Friends of the Earth Nigeria (ERA/FoEN) participated in the protest.

The organisers said the rally was held to commemorate the International Water Day and to address water challenges in the state.

The march began at the Under Bridge in Ikeja, the state capital, and ended at the House of Assembly where the protesters were barred from entering the building.

A government representative, Abdulkareem Dauda, received the letter from the protesters.

One of the protesters, Hassan Soweto, said the government should consider its actions in the water sector to avert further protests.

“We will not stop until the Lagos State Government desists from privatising water. As you can see, new barricades have been erected to prevent Lagosians from accessing their lawmakers and it means they are not representatives of the people and they are not ready to listen to the people and they are telling people to take over the government and if that is what they want they will get it.”

Veronica Nwanya, a representative of ERA/FoEN, said, “Is it too much to ask that they make water accessible and available to Lagosians?”

“We are here to celebrate International Water Day and it is the time to tell our government that we are saying no to any water bill. The responsibility of the government is to provide social amenities and water is paramount. Without water, there is no life and we need to remind our governor that his duty is to provide potable water for the people and not privatisation of water.”

Achike Chude, Vice Chairman of the Joint Action Front, warned the politicians to desist from ”pushing the people against the wall”.

“We must express the displeasure of the people of the state. Before 2015, we did not vote for officials to put a gate against the people that voted them in,” Mr. Chude said.

“We want to inform Nigerian politicians that the people have been pushed to the point of resistance and the only way to avoid this is to change course. We cannot continue to tolerate all the hardship from the politicians to the people. Power belongs to the people and not to those in Abuja or anywhere.”

Suggesting an alternative to the water privatisation, Babalola Medayedupin, Executive Director of the Centre for Dignity said, “Lagos set up a security trust fund and people contributed money to ensure Lagos is safe and you can attest to the fact that Lagos is safer.

“Let the government set up a water trust fund to make water accessible to everybody. We know this privatisation is not to the favour of the common man but a selected few. We are saying no and until they agree to our terms we won’t agree to theirs.”

Responding, Mr. Dauda apologised to the protesters for the barricades erected to deny them entrance into the House of Assembly complex.

“Let me start on the barricade issue, it is not a problem to let you in if you can assure us that there will be total coordination. Not all protesters would be coordinated like you and we apologise for the barricade.

“On the water issue, I have received the letter given to me by the leader of the group and I would ensure that it is delivered to the governor as soon as he returns to the state and we would contact the names given for proper discussion. On behalf of the governor, we thank you for a peaceful protest.”