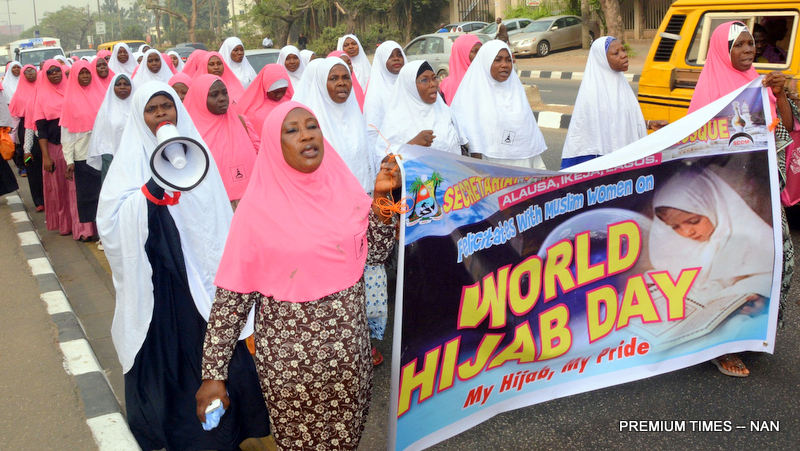 FILE PHOTO: A Procession during World Hijab day in Lagos

The Lagos State chapter of Ansarul-Deen Youth Association of Nigeria (ADYAN) on Saturday called for public understanding on the use of hijab by Muslim women.

The Deputy Amirat of the association’s Sisters Forum, Islamiyat Adebowale, made the call at a programme in Lagos to mark the 2018 World Hijab Day.

The News Agency of Nigeria (NAN) reports that the programme was organised by ADYAN in collaboration with the Advanced Centre for Advocacy Development and Empowerment of Muslim Community (ACADEMY).

The World Hijab Day is aimed at creating awareness and presenting the right perception about the use of hijab by Muslim women.

Mrs. Adebowale said that Muslim women should not be harassed for wearing hijab in schools, offices and other places, saying that such harassment violated their rights.

She said that wearing of hijab by Muslim women was a constitutional right and a religious obligation which should be respected.

“The issue of harassment of women wearing hijab is becoming common. We experience it especially when we deal with some members of the public that do not believe in hijab.

“This harassment or discrimination happens in banks when our women go for biometric capturing, immigration offices, NYSC camps and even schools.

“In most of these cases, our women are forced to remove their entire head coverings while taking photographs for biometric capturing, or antagonised for wearing the hijab.

“If women who wear skimpy dresses can go about freely in the society, why should those wearing hijab not do same? It is our right; it is part of our religion,” she said.

Mrs. Adebowale said that hijab did not represent terrorism, crudeness or any other negative thing.

“Hijab sisters are not terrorists, they are normal people. We have them as doctors, nurses, bankers and politicians.

“Hijab does not mean anything bad. The wrong perception must change,” she urged.

She commended the National Assembly for scheduling a public hearing on discrimination against people wearing hijab for February 5.

Earlier, the Amirat of Women Wing of ACADEMY, Umm Showole, said that the there was no reason for discriminating against women wearing hijab.

“We are urging a stop to harassment of women in hijab in schools, homes and markets.

“Our rights should be protected,” she said.