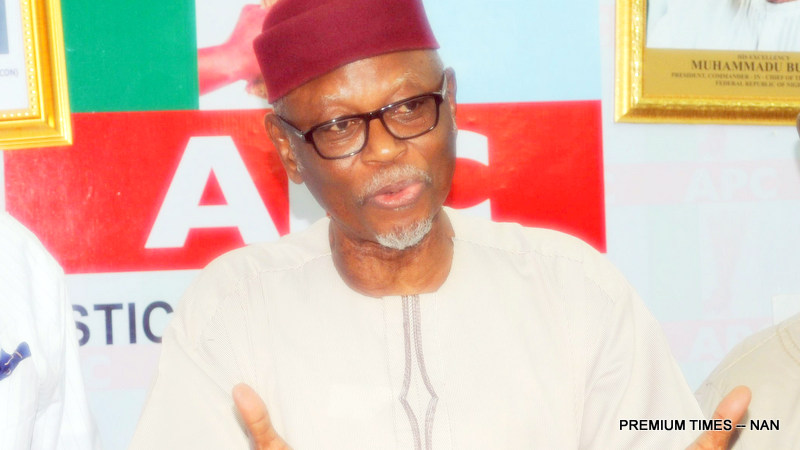 APC has not endorsed any candidate for Ekiti governorship — Oyegun

The national chairman of the All Progressives Congress, APC, John Odigie-Oyegun, has said that the party has not endorsed any candidate for the governorship election in Ekiti State.

Mr. Oyegun told PREMIUM TIMES on the phone that there was no form of endorsement for anyone.

“We don’t endorse for anyone. The party cannot endorse,we are father of all; every member and contestant,” he said.

He said the party would give all the contestants a level-playing ground, and that whoever emerges winner in an open contest would be the party’s candidate.

He also debunked claims that a recent visit to President Muhammadu Buhari by the Minister of Mines and Steel Development, Kayode Fayemi, in company of a former governor of Ekiti State, Niyi Adebayo, was an endorsement of Mr. Fayemi.

“The APC is a democratic party, we are not dictatorial or nocturnal in all our dealings. When you talk of a consensus candidate, you talk of the common decision of all the contestants to pick on one person, not that any leader will come and impose a candidate against the will of the party delegates who are entitled to their votes,” he said.

“If I didn’t impose a candidate in my state, Edo, and in other states where primary elections had been conducted by our party; if the president had not imposed anybody in those states, why should we do such in Ekiti?”

20 die in accident along Kaduna-Abuja expressway