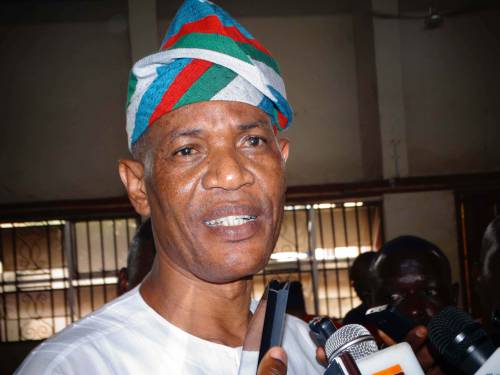 The governorship candidate of the Alliance for Democracy (AD) in the 2016 governorship election in c, on Thursday formally returned to the All Progressives Congress (APC) along with his running mate, Gani Dauda, and his supporters.

He also came with the entire membership of the AD in the state, who were actually in the APC and moved out with him over grievances arising from the September 2016 governorship primaries of the party.

Mr. Oke announced his return at a rally held at the MKO Democracy Park in Akure, an event attended by the governor, Rotimi Akeredolu, and other leaders of the party in the state.

Another governorship candidate, Olamide Falana of the Democratic Peoples Party (DPP) also decamped to the APC at the event.

But the APC has urged Mr. Oke and his supporters to return to their respective registration areas (wards) to register before they would be recognised as members of the party.

Addressing the rally, Acting Chairman of APC in the state, Ade Adetimehin, said Mr. Oke’s return to APC was commendable, but urged him to formally defect to APC at his ward, where a register had been opened for him to put down his name.

“What we are doing here today is just a jamboree; the actual exercise is at the ward level. Before you can be a member of the party, you have to go back to your ward and register,” Mr. Adetimehin said.

“Registers have been opened in all the 203 wards in the state. Go there and put down your names before you can be members of the APC.”

Mr. Adetimehin however commended Mr. Oke’s courage, promising that he would be accorded respect as he returned to the party.

He recalled the crisis which attended the primaries which saw Mr. Oke leaving the party in October of 2016, saying the allegations against the primaries were founded on falsehood.

He however added that the controversies had been thrown into the “dustbin of history,” and expressed hope that such controversies would not arise again in the party.

Mr. Oke, in his address, urged his followers from the AD to be loyal to the APC and work to develop the party.

He also urged them to obey the instructions of Mr. Adetimehin and return to their respective wards to register as members of the APC.

He said he had returned to the party to offer his experience and competence, noting that all he asked for was respect from the party leadership and membership.

Governor Akeredolu, in his remarks said there was room for more returnees to the party.

He said with the return of Mr. Oke, all conflicts had come to an end.

He expressed gratitude to God for the achievement and noted that the past should be left in the past.