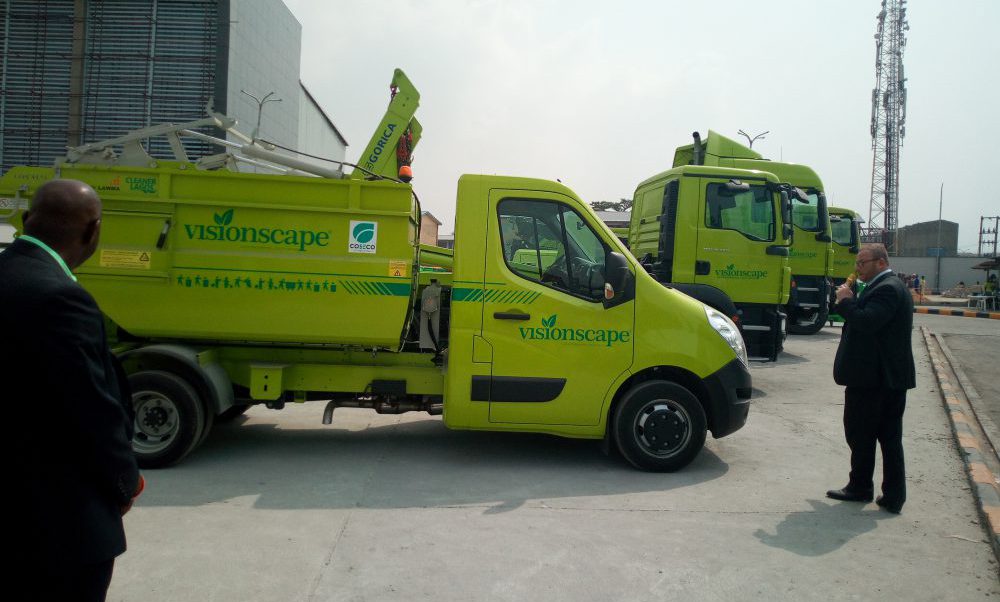 The Lagos State Government and a private waste operator, Visionscape Sanitation Solutions, on Wednesday showcased a Transfer Loading Station in Lagos Island as part of efforts to rid the state of solid wastes.

Thomas Forgacs, the Chief Operating Officer of Visionscape, said though waste collection would start in Agege this week, the company will begin full scale operation in three months.

“If you go to the Epe landfill, there is lots of work, we’ve already injected $2 million just for the work bridges,” Mr. Forgacs told journalists during a media facility tour of the Visionscape Tapa Transfer Loading Station.

“Because if you go to the landfill you can (sic) realise we’d built a complete infrastructure for landfill – we have generators, we built a portion of road, we’ve done an access road from the main road.

“So we’ve done a lot of work and we will operate the fill in two weeks. We have all the technology to do the follow-up on a daily basis on every details so we can know by day, by trucks, by trip, how many trucks is coming to the landfill, who’s the driver, where does he come from?”

On Wednesday, Mr. Forgacs said the capacity is now 2000 (metric) tonnes per day.

Brand new compactor trucks, skip loaders, tow trucks, and Ford Rangers (for monitoring by operations officers and managers) were shown to journalists as well as a demonstration of how the waste trucks would work on the streets.

Mr. Forgacs said the company, which is in a public-private partnership with the Lagos State government, had invested “more than $50 million” on trucks and vehicles alone.

“The compactor trucks are 24, 16, and five cubic meters (capacity) to be deployed depending on the density of the area,” he said.

The equipment are part of the Cleaner Lagos Initiative of Governor Akinwunmi Ambode aimed at reducing the accumulation of solid waste, promoting best practices such as reusing and recycling.

In September last year, the government began the distribution of one million waste bags to households in the state as part of the first phase of the initiative.

During his presentation of the state’s budget for the 2018 fiscal year, Mr. Ambode urged Lagos residents to embrace another part of the initiative, the Public Utility Levy, which would begin this year.

Also speaking on Wednesday, Abiodun Bamigboye, the Permanent Secretary of the Ministry of Environment, said the levy would be handled by a unit in the ministry known as the Public Utility Monitoring and Assurance Unit.

“The public utility levy is supposed to take off immediately we start the full activity of Visionscape packing the wastes on the roads,” Mr. Bamigboye said.

“And as it is done, the approach is for people occupying between zero and 700 square metres, they will pay fairly low rates that is even better than what they paid per flat to PSP operators of old.

“The truth is, we know it’s an imbalanced economy and not everybody is comfortable enough. So we are trying to get the more comfortable to actually take more of the bills, notwithstanding that we have more populations in the areas where we have people occupying the 0-700 square metres.”

When Mr. Fashola, who is now a federal minister, commissioned the Simpson Street Transfer Loading Station nine years ago, the facility was equipped with nine trailers/hoists, 18 trailer trucks, six static compactors hoists, and 30 static compactor bins for collection of waste within the Lagos business districts as well as the Lagos island, Victoria Island, Ikoyi, Apapa, and Yaba axis.

Mr. Fashola designated the station as a temporary receptacle for waste collected around the city by licensed Private Sector Participants (PSP) operators before final transportation to landfill sites.

But on assumption of office, Mr. Ambode displaced the PSP operators with a foreign investor, Visionscape Sanitation Solutions, forcing the aggrieved operators to drag the government before a court.

But the government explained that it had only restricted the PSP operators to business and commercial areas in order to allow the investor focus on residential waste collection.