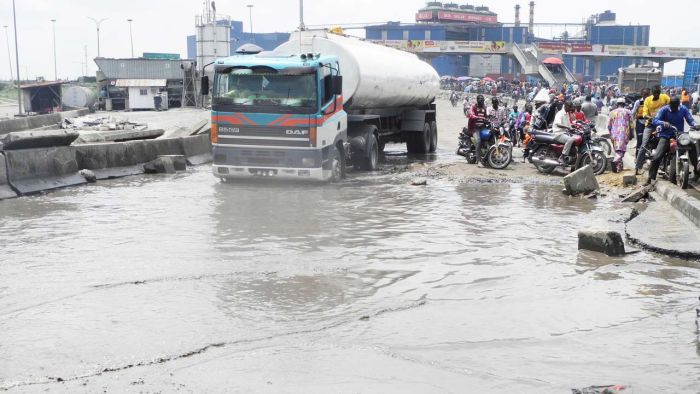 The reconstruction of the 35 kilometres Apapa – Oworonshoki expressway in Lagos will begin next week, chairman of Dangote Group, Aliko Dangote, has said.

The federal government in September asked the Dangote Group to rebuild the road in exchange for some tax credit.

Speaking to State House correspondents after meeting with Vice President Yemi Osinbajo at the Presidential Villa on Tuesday, Mr. Dangote said the “Apapa-Oworoshoki way is going to start next week.”

The businessman said everything including the design has been handed over to his group and contractors will be selected after ongoing bidding exercise is completed.

“The bidding process is going to go on where four, five contractors will bid, anybody that wins the contract we will fund the project under the agreement that we have,” he said.

Those who attended the meeting with Mr. Osinbajo include the Minister of Power, Works and Housing, Babatunde Fashola and the Director General of the Nigerian Ports Authority, NPA, Hadiza Usman.

“Government will be able to save a lot of money,” he said.

“Right now, the total loss to the economy is over N10 billion daily.

“You have to understand that Apapa and Tin Can Island ports handle about 80 per cent of the cargo that come into Nigeria. As we speak, some of our ships are waiting to come in from Lome and discharge.

“It is not because we don’t have anywhere to birth the ship, but because all our operations are choked up because we have containers, general cargo that have actually been there and we are not able to remove,” he said.

He also said he is more worried about “smaller operators “ that have imported cargo and whose charges are accumulating everyday. He said as a result of that, transport charge has almost doubled for such importers.

Mr. Dangote also said the government has given directive for the ports to be de-congested immediately. He said that is the right decision to take and assured that “Nigerians will see a massive change by next week.”

On her part, the NPA head, Ms. Usman, said the challenge around Apapa area is access to the Apapa and Tin Can ports.

She said Tuesday’s meeting agreed on the need to move empty containers out of the area.

“So we have received clear directives that all empty containers need to be taken to holding bay, shipping companies can not have ports locations within the ports any more, so that will free a lot of traffic within the area.

“We have also noted the need for all tank farms owners to comply to the utilization of holding bays. No more approvals of tank farms will be permitted within the Apapa area any longer,” she said.

Ms. Usman also confirmed that the government has received the full commitment of Mr. Dangote to complete the reconstruction of Apapa wharf road by June 2018, adding that “alternative works will commence within the immediate period for Tin Can Island.”

She said Mr. Osinbajo has also directed that the trailer park on Tin Can Island should be reconstructed within three months, so that there will be access to holding bays and trailer parks.

She said her organisation is placing advertisements seeking for expression of interests from the private sector to operate some trailer parks and holding bays within the Tin Can Island area.

“We are embarking on that within the shortest period and we appeal to the exporters to work with us in traffic management. We are instituting strong task force that will manage the traffic inflow and outflow within the Apapa and Tin Can Island environ.

“This is an emergency for us and that is why we are here today to address these issues. We have seen the commitment from the ministry of works and the NPA will give support in anyway we can,” she said.

Also speaking, the Minister of Power, Works and Housing, Babatunde Fashola, said the meeting is that of stakeholders within and around Apapa.

“We met with all stakeholders in October and it was based on the report I filed then that the VP convened this meeting.

“ The highlight is to appropriately define the problem which essentially is a port management challenge that is now compounded by the conditions of the road.

“The conclusions are essentially to accelerate first palliative repair of the Tin Can bound section of the road with Liverpool road, while the procurement being undertaken with the Dangote group is finalised. Some relief will be provided pending when we finalise procurement,” he said.

Mr. Fashola also said the Military Task Force operating within the Apapa port area has been disbanded because “we have allegations of them collecting money to ferry trucks through to the gate and that is why the minister of defence is here.”

EXCLUSIVE: SUKUK funds intact; Why we have not paid contractors – Nigerian govt

Aguero recovers after collapsing at half time of Nigeria match