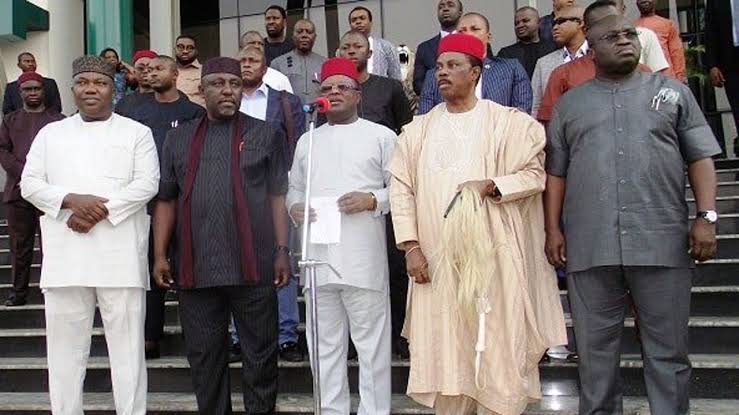 The 17 governors from the South-west, South-east and South-south are to meet in Lagos on Monday to discuss latest national issues forge stronger partnership.

The meeting is coming after 12 years of a similar gathering.

A statement by the Secretary to the Lagos State Government, Tunji Bello, said the meeting would be co-hosted by the Governors of Lagos State, Akinwunmi Ambode and Akwa Ibom, Emmanuel Udom.

Mr. Bello said the meeting is in line with the realisation that the different states in the South have since 2005 developed several areas of comparative advantage which could be harnessed and become mutually beneficial.

According to him, the governors would also be expected to adopt a common position on the issues of armed robbery, kidnapping, devolution of powers and issue of fiscal federalism which have all gained prominence of late.

“The 2017 Lagos summit of the 17 Southern Governors representing the South-south, South-west and South-east zones is expected to come up with a communiqué after the deliberation.

“It is noteworthy to recall that the inaugural meeting of the Southern Governors took place in Lagos in 2001 under the administration of Asiwaju Bola Ahmed Tinubu,” Mr. Bello said.

The statement added that the predominance of views is that if the Southern states speak with one voice, they are bound to attract weighty and credible listenership.

Governors from the South-east and South-south zones have been meeting intermittently with the latest on October 9 in Owerri where they rejected calls for the breakup of the country while rallying support for its continued existence as an indivisible entity.

The governors made their position known in a communiqué issued at the end of an extensive meeting of the South-east/South-south Governors Forum in Owerri.

They reiterated that a divided nation would not be acceptable to the people of the two zones and re-echoed the need for the country to remain united.

The News Agency of Nigeria reports that eight governors and one deputy governor attended the meeting.

The communiqué was signed by Chairman of the forum and governor of Akwa Ibom, Udom Emmanuel.

The forum commended the role played by stakeholders and patriots in instituting broad-based negotiations between the North and the South-east, saying this led to the setting aside of a quit notice issued to the Igbo by some groups.

It, however, expressed worry over what it considered lack of significant federal presence in the region and called for more attention to be paid to the infrastructural needs of the affected states.

The forum also resolved that the regions would unite in a way that would be beneficial to the political future of the people of the region.

It said that the bond between the South-east and South-south zones was much more than political party considerations.

The forum also commended the efforts of security agencies in the regions, saying these had brought peace and stability.

It commended the Inspector General of Police, Ibrahim Idris, for organising security summit in different zones and expressed optimism that the outcome would lead to better policing in the country.