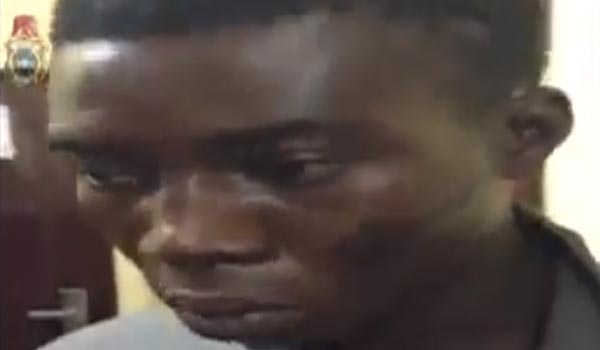 VIDEO: How we rob our victims in Lagos traffic – Suspect

The Rapid Response Squad of the Lagos State Police Command has arrested a 22-year-old man for allegedly robbing an expatriate and his wife during a heavy traffic at Marine Bridge, Ijora, Lagos.

Samuel Meme, an ex-convict, was arrested after he connived with another man, Wasiu, to break two side glasses of the foreigner’s Toyota SUV before robbing the occupants.

“Wasiu taught me how to rob in traffic and I have mastered the act,” the police quoted Mr. Meme as saying.

“I operate alone. Occasionally, when I run into like minds we robbed whenever there was traffic in Marine Bridge. We sleep under Ijora Bridge and we are many there.”

On how he robbed the expatriate, Mr. Meme said he had planned to operate alone that night.

“Luckily for me, there was heavy traffic which extended deep into the night in Marine Bridge. Just as I was planning to strike, I ran into Wasiu. Almost instantly, we decided to rob cars together,” Mr. Meme said.

“During the operation, we opted for a car at the rear, a Toyota SUV. The occupants were whites, I guess husband and wife. Wasiu and I positioned ourselves on both sides of the car and we broke the two rear glasses with heavy stones.

“I collected the man’s phone while Wasiu took her purse containing N60,000. The lady pleaded for her drug from the purse and I asked my colleague to give her and we left for another car.

“The next car in front was a Toyota Corolla, with a lady as the lone occupant. We broke the two side glasses too but the lady insisted she had no phone but we collected her bag and jewelry.”

The police said Mr. Meme was arrested a day after the robbery and he confessed he also steals truck batteries in Apapa and environs.