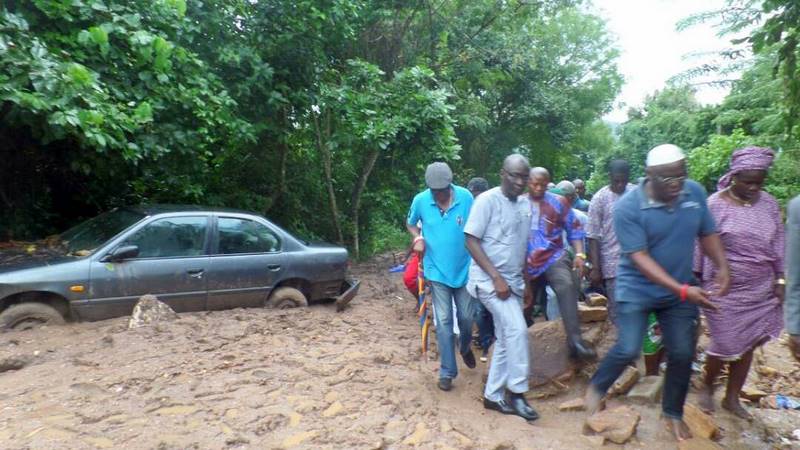 The Ekiti State Government has reacted to a disastrous movement of soil and rock, also referred to as soil creep, at Agboona Hill, Okemesi Ekiti, warning residents to stay at least 300 metres away from the hill.

The government said it fears a re-occurrence, which might likely be more destructive and life threatening.

Properties worth millions of naira were either swept away or destroyed by the creep in the early hours of Thursday, after three days of torrential rains in the ancient town of Okemesi Ekiti.

Soil creep is described as the slow downward progression of rock and soil down a low grade slope; it can also refer to slow deformation of such materials as a result of prolonged pressure and stress.

The Deputy Governor of the state, Kolapo Olusola, who led a delegation of the Ekiti State government to the have an on-the-spot assessment of the havoc wrecked by the creep, gave the movement order to the residents.

Mr. Olusola congratulated the people of the town for not suffering any loss of life during the creep. He promised that the government would hold a meeting with the monarch and stakeholders in Okemesi Ekiti on how to minimise the effect in future.

“Governor Fayose sent us here to commiserate with residents whose properties were destroyed by this large magnitude soil creep, there will be a meeting with stakeholders on how to mitigate its effects if the natural phenomenon occurs again in the future,” Mr. Olusola said.

“Experts have said there is likelihood of a re-occurrence, though it’s painful that properties were lost and relocating is not expected to be easy, we need to adhere to their advice that we stay 300 metres away from the hill.

“Far beyond rituals and sacrifice, we have to hearken professional advice, obedience is better than sacrifice.”

The monarch, who noted that people were already alluding spiritual reasons for the development, begged the governor to help expand the base of the Hill.

“What happened on Thursday once happened in 1973 but nothing was done by the government then, the creep also occurred in recent times but not of this magnitude, I plead with your Excellency to help us expand the mountain base,” he said.

“As it is now, God forbid, if it happens before the expansion, it is most likely to be disastrous.”