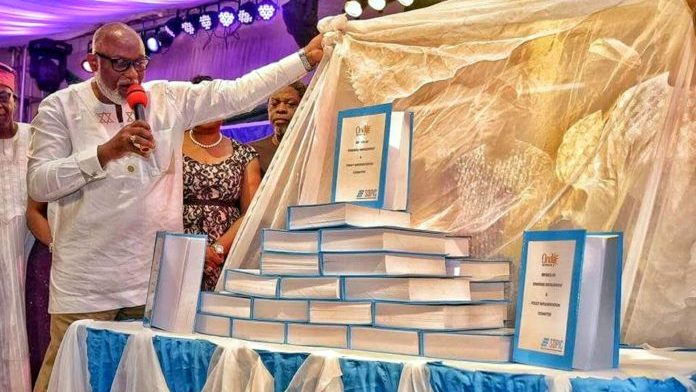 A policy template that will guide the All Progressives Congress, APC-led state government in Ondo State in developing the economy of the state has been unveiled.

The document which is tagged the “Blue Print to Progress, 2017-2021,” followed a report of the Strategic Development and Policy Implementation Committee SDPIC, put up by the state government.

While unveiling the document on Wednesday, at the Dome in Akure, the state governor, Oluwarotimi Akeredolu, said the move signalled the commencement of total transformation of all sectors by his administration.

Mr. Akeredolu stressed the importance of meaningful planning to the success of any government, noting that that was why his government chose to take off on a sound footing based on well mapped out strategies.

“We believe it is more profitable for us to proceed assuredly than to embark on any unorganised pastime which accommodates tokenism and peripheral attention extended to systemic problems of existence in the State,” the governor said.

He directed all state officials to adopt the “blueprint to progress” as a guide to good governance and ensure strict compliance with its contents.

“Consequently, we direct all state functionaries to adopt this compendium of recommendations for the administration of all sectors as a guide for governance,” Mr. Akeredolu said.

“Commissioners, heads of agencies and parastatals are further instructed to ensure strict compliance with the clear provisions of this document as regards their respective portfolios and agencies.”

Mr. Akeredolu expressed his administration’s desire to make the welfare of the people a strategic component of his policy.

He explained that proper planning dictated the pace at which his government moved at inception not minding the palpable anxiety concerning the delay in the appointment of commissioners and advisers until recently.

“An appreciation of the necessity for planning dictated the pace at which we proceeded from inception,” he said.

“It is our fervent hope that the wait will be justified by the quality of performance which all government functionaries will bring to bear on the challenges confronting the state.

He thanked members of the SDPIC for availing their wealth of experience, time and resources to design a roadmap for development for the state.

“Posterity reserves an enviable mention for this imperishable intervention. These people will be remembered for their invaluable service to the people at this crucial period in the life of the country,” Mr. Akeredolu said

Earlier, the Deputy Governor and chairman of the SDPIC Steering Committee, Agboola Ajayi, said the report also provided an in-depth exposure to constraints currently encountered by the state as well as the potentials and possibilities available.

He noted the document would chart a clear course of government activities for the next four years, and stand the administration in good stead in engagements with development partners including World Bank, UNDP, UNICEF, UNESCO, UNIDO, FAO, JICA, USAID.

“While thanking the SDPIC subcommittee members for this great service to Ondo state, I also wish to acknowledge and commend all the members of the Steering Committee, especially the Secretary, Mr Kunle Adebayo and his staff who ran a highly efficient secretariat,” Mr. Ajayi said.

Maritime students appeal to NIMASA to fast-track training for certification