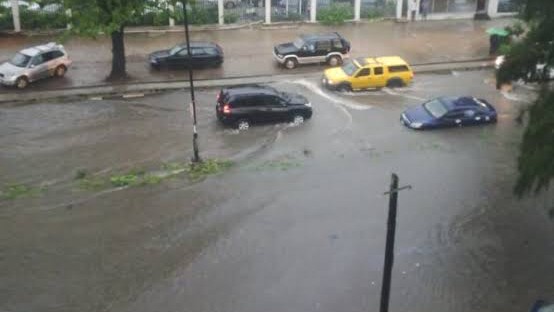 There is a heavy traffic gridlock on the Ladipo axis of the Lagos-Abeokuta expressway as the road was flooded after a heavy downpour Monday morning.

PREMIUM TIMES correspondent who moved around the metropolis reports that the rain, which fell on some of the major parts of the state, began around 7 a.m.

When our correspondent visited the Ladipo axis of the expressway, water flooded both sides of the road as road users lamented the situation.

A road user, Daniel Oluyemi, told PREMIUM TIMES that many Lagosians spent most part of the day in the traffic.

“Many people already have their businesses and other plans damaged with what I experienced today. I spent five hours in the traffic. It was pathetic.”

Chigozie Ogbu, another road user who identified himself as a trader, lamented the state of the road and its effect on people’s schedule.

“As it is now, I can’t do business again today. I have wasted the better part of today in traffic. You should see how people living around that part of the state are in a hurry to go home quickly because the traffic situation will be uncontrollable in the night,” he said.

When PREMIUM TIMES correspondent visited the Ladipo spot again around 5 p.m. on Monday, the traffic situation had only improved slightly as vehicles still struggled to move around the flooded parts of the road.

A commercial bus driver, who identified himself simply as Omo’ga, told PREMIUM TIMES that the situation disrupted his routine movement too.

“Ordinarily, I take passengers from Oshodi to Sango like four to five times daily. Today, I am struggling with the second trip. The traffic is terrible; I will simply go and park the vehicle and rest until tomorrow,” he said.

“Many of our people (fellow drivers) are struck in traffic on different parts of the road. It takes courage to ply this road as it is now,” another commercial driver who declined to have his name in print explained.

Some commuters who spoke with our correspondent however lamented the sharp increase in transport fare.

“Already, I spent the money I would ordinarily expend on transport fare for about two days this morning alone. The government should do something about the road. The flood is scary,” another trader, Titilayo Tomori, explained.

Meanwhile, at different junctions along the road, PREMIUM TIMES observed that many commuters were stranded as there were fewer vehicles plying the streets.