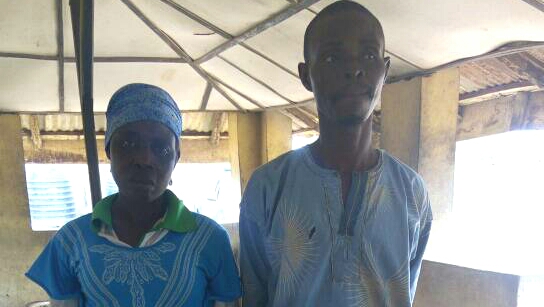 The Police in Ogun State have arrested a couple for allegedly tying up their seven-year-old daughter in a sack and dumping her by a roadside to die.

The police said they suspected the couple wanted to use the girl for some rituals.

The police spokesperson in the state, Abimbola Oyeyemi, who disclosed this to PREMIUM TIMES on Monday, gave the identities of the suspects as Nasiru Adeyemo and Idayat Adeyemo.

‎”The Ogun State Police Command has arrested one Nasiru Adeyemo ‘m’ and his wife Idayat Adeyemo ‘f’ for making an attempt to use a seven-year-old girl Abibat Arike Adeyemo ‘f’ for ritual purpose,” he said.

Mr. Oyeyemi said the suspects were arrested after the police were alerted to a strange load dumped by a road side in Asabala area, along the Papalanto/Sagamu road in the state.

He said the divisional police officer for Owode Egba, Shehu Alao, immediately led a team of his officers to the scene and untied the load in a white rice bag sack.

“Surprisingly, it was a seven-year old girl, whose one of her right-hand fingers had been cut off, who was tied and put inside the sack and dumped at the road side since Friday 11/08/2017,” Mr. Oyeyemi added

The police spokesperson said the team found that the girl was still alive and quickly took to an hospital for medical attention.

“It was when she regained consciousness that she informed the police that her father and stepmother were the ones who cut off one of her fingers before tying her and put her inside the sack and dumped her inside the bush for her to die there.”

He said upon the information from the victim, the police launched a manhunt for the girl’s father and his wife, both of whom were arrested in the evening of Sunday.

Mr. Oyeyemi said the duo are currently undergoing interrogation, adding that the state Commissioner of Police, Ahmed Iliyasu, had ordered the transfer of the case to the Anti-Kidnapping/Cultist section of the police for further investigation and prosecution of the suspects.