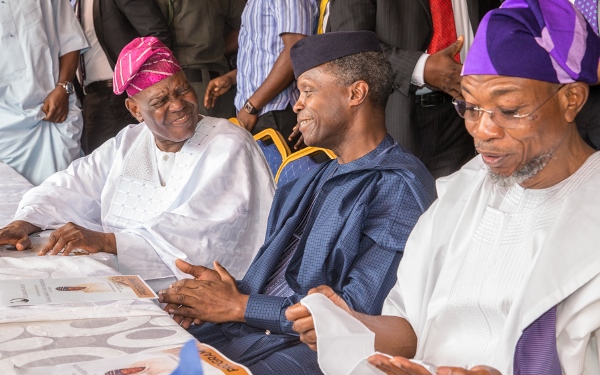 Osinbajo (M) and Bisi Akande (L) at the Fiadau in honour of mother of Governor Aregbesola.

Acting President Yemi Osinbajo was on Tuesday among thousands of dignitaries that thronged Ilesa, Osun State, for the seventh day Fida’u prayers for Governor Rauf Aregbesola’s late mother, Saratu Aregbesola, who passed on at 84.

The event, which started at about 1.00 p.m., was marked by the recitation of the Holy Qur’an, selected prayers, public lecture by a don and Christian prayers by a cleric.

One of the prayer recitations was offered by Ahmad Suleiman, who accompanied Mr. Ganduje to the event.

A don and Chief Imam of the Federal Polytechnic, Ede, Taofek Abdulhamid, in his abridged lecture, called on the living to always remember that anything with a beginning, including life and political office, would have an ending.

He advised that as mourners remembered the late Mrs. Aregbesola (also known as Iya Olobi) they should strive to mend their own lives so that they would inherit eternal life.

Accordingly, he said that people should learn to honour time, including their time on earth, as a sensible act, not to miss their way in the end.

The don further urged political office holders to see their positions as an opportunity to serve the people, adding that good followership also would correct leaders and make them accountable for the country.

In an interview, Mr. Amosun said he came to celebrate a life well spent and worthy of emulation.

He recalled his relationship with the deceased as the late Octogenarian was born in Ogun while he, Amosun, married from Osun.

The News Agency of Nigeria reported that the event also witnessed cultural dance performances, climaxed with dining and wining.