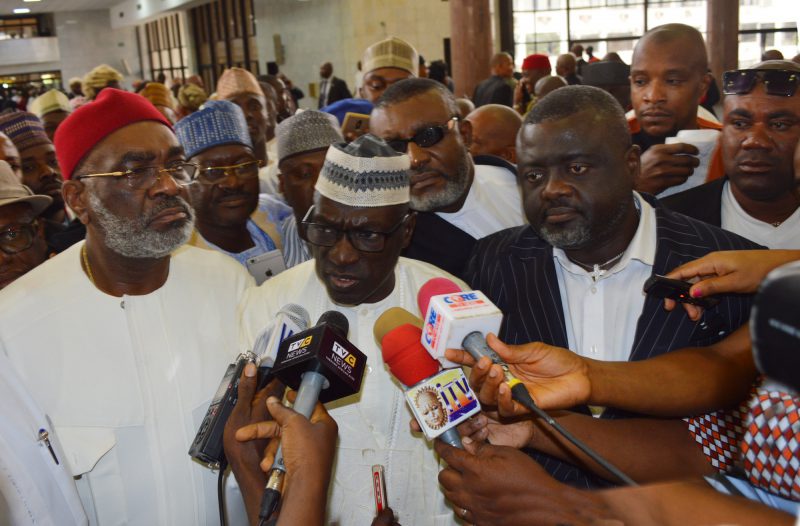 Caretaker committee chairman of PDP, Sen. Ahmed Makarfi speaking to newsmen after Supreme Court sitting in Abuja on Wednesday (12/7/17) sacked the National Chairman of the opposition of the, Sen. Ali Modu Sheriff. With him are Sen. Ben Obi (L) and Rep. Jones Onyereri. 03460/11/7/2017/Ernest Okorie/BJO/NAN

The Peoples Democratic Party, PDP, in Ondo State has said those who were part of the Ali Sheriff’ faction should return to the party without fear of reprimand or sanctions.

The Ondo chairman of the PDP, Clement Faboyede, said on Monday in Akure that all aggrieved members of the party should return in order to join hands in repositioning and moving the party forward.

Mr. Faboyede spoke at the end of a meeting of the party in Akure on Monday following the judgement of the Supreme Court which affirmed the Ahmed Makarfi national leadership of the party.

He said the party was open to reconciliation that would strengthen it in the state.

“This is our first meeting of the born again PDP after the judgement and the attendance is encouraging and involved all cadres of party leaders from wards level to state level,” he said.

“I want to appeal to all aggrieved members to please come back home.

“I want to appeal to all other members of PDP that are still aggrieve to please come back home and let’s work together again. There is nothing we would gain from quarrelling.

“The umbrella is big enough to accommodate everybody and the PDP is a party ruled by the constitution…more of constitution than transition and we are happy that the crisis in the party is settled now.”

According to Mr. Faboyede, it is a no victor no vanquished situation. He urged all the party men and women to have a sincere mind of reconciliation.

“We charted a way forward and part of it is that we are preparing to hold ward congresses to elect our ward delegates on August 8 and from there we will elect our local government delegates on August 10 before we move to Abuja for the non-elective convention,” he said while giving details of the outcome of the meeting.

“We also agreed in this meeting today that we are returning our party to the grassroots. So the party is back to the people as stated in our constitution so there is no god fatherism any longer.”‎