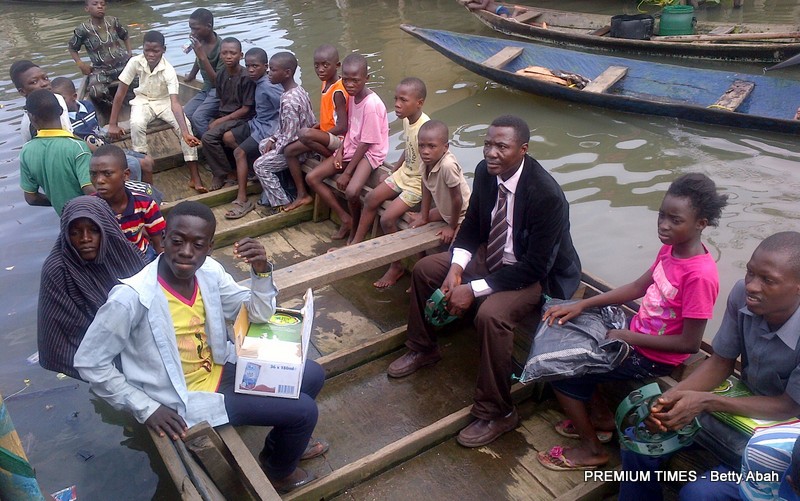 Makoko: The 'production crew' for the BringBacktheGirls' photoshoot on the water

The dredging and oil exploration activities of government agencies and their partners have pushed more fish beyond the reach of fishing nets, the fishermen in Makoko, a popular Lagos slum community, have said.

Speaking at a Community Dialogue themed ‘Fish-Not-Oil’ facilitated by the Health of Mother Earth Foundation on Monday, the fishermen said the continuous dredging of water bodies across the state had sent the fish into deeper waters.

“The fishermen are no longer enjoying fishing,” said J.P. Akere, a fisherman and a local chief in the community.

“Oil spillage coming all the way from Delta has affected so many fishermen and we are no longer making money. Our nets have been destroyed by the chemicals in the water, also, dredging has made the fish to go down to where the nets cannot reach.”

For years, Makoko, a fishing community which comprised mostly of Egun people, has battled for survival against the Lagos State government.

The last attempt by the then governor, Babatunde Fashola, to demolish the community led to the killing of a local chief, Timothy Asinponu, 51, who was shot by a police officer.

A wave of international media spotlight on the community has, however, forced the government to back away from its demolition threats.

But the fishermen in the community say the ongoing government’s dredging activities, including the one at the recently demolished Otodogbame, have impacted negatively on their fishing.

Ishola Agbodemu, an activist who works with the urban poor and vulnerable people, said the plight of fishermen is something that needs to be addressed urgently.

“The government is not conscious of what will happen to the fishing community,” said Mr. Agbodemu, the convener of the Rural and Urban Development Initiative.

“They are concerned about their megacity, dredging, evacuating the slum but we are not against development but they have to put into consideration people’s means of livelihood. This dialogue is very important because it will create the awareness to the general world that at least government should realise what they are doing.”

Monday’s community dialogue comprised of exercises that aimed to assist the inhabitants to review their environmental situation as well as identify needed areas of action in order to defend their heritage. Community members discussed in groups their fishing methods, impacts of government activities on their livelihoods, and basic infrastructural challenges.

Mohammed Zanna, a representative of the Justice and Empowerment Initiative, urged fishermen to adopt new fishing methods that would be in tune with the demands of a mega city.

“The same methods our great grandfathers fish is the same way we are fishing, we need to change with the times,” he said.

Earlier, in his welcome remarks, Nnimmo Bassey, HOMEF’s director, said the community dialogue was aimed at preparing an action plan that would help recover ecological heritage and preserve same for future generations.

“There must be a time when we realise that we cannot win all battles fighting alone,” Mr. Bassey said.

“We must come to the point when we organise and connect to others in similar situations like ours. That way, we get to share ideas, pains, hopes and strategies.

“Fisher folks recently came together at Okrika Waterfront in Port Harcourt while others came together in Kribi (Cameroon) and Durban (South Africa). The circle gets wider. Our FishNet Dialogues are opportunities to forge strong ecological collectives and to show the world that we have the adaptive solutions to the ravages of climate change.

“Our floating homes are pointers to the future of Lagos as the seas reclaim the land that land speculators stole form the sea. We are the people. We are the solution, not the threat. The threat is our dependence on crude oil – the very resource that is firing global warming. Today we present a simple wisdom: it is time to keep offshore oil untapped.”