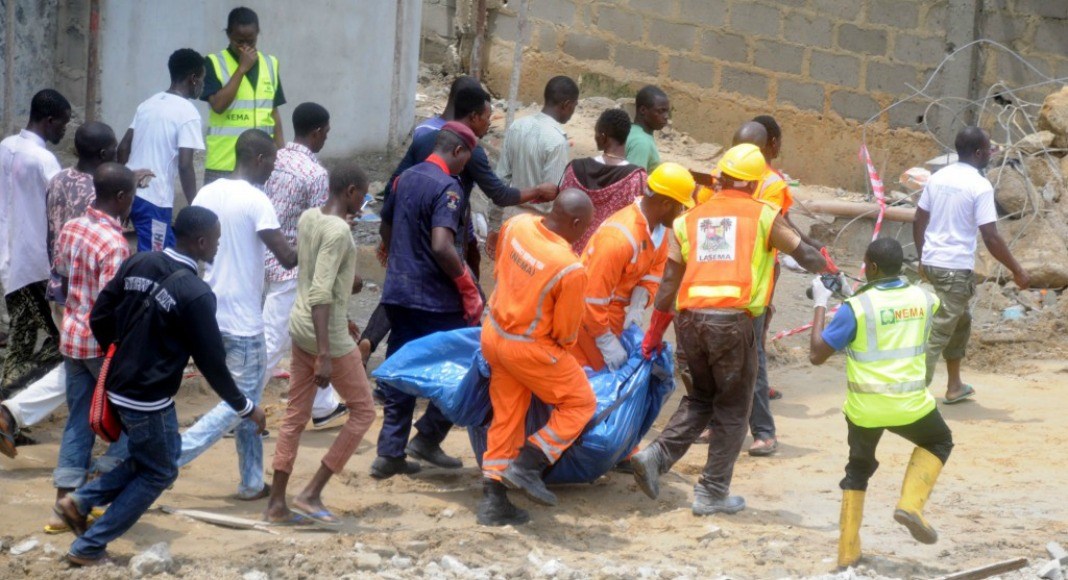 LASEMA officials carrying a body in a bag. [Photo: QED.ng]

Mother, daughter die in another collapsed building in Lagos

A woman and her daughter died on Saturday in a collapsed building at Abule-Egba, a Lagos suburb, according to the Lagos State Emergency Management Agency (LASEMA).

LASEMA, however, said a five-year-old girl was rescued alive and was immediately taken to the General Hospital, Ikeja, by the State Ambulance Service.

The agency’s spokesman, Adebayo Kehinde, said a distress call via the Emergency toll-free number 767 or 112 was received at 11.48 a.m. following a collapsed building at No. 7 Saidu Okeleji St., off Alaro Street, Meiran in Abule-Egba on Lagos-Sango-Abeokuta Expressway.

“Investigation conducted by the agency at the scene of the incident revealed that a bungalow under construction with sands and concrete blocks seen on the deck, suddenly caved in with three people trapped in the rubble.

“The prompt response by emergency responders led to the rescue of five years old girl, who was immediately moved to the General Hospital, Ikeja, by the Lagos State Ambulance Service.

“Two persons — a 30-year-old mother identified as Basirat and her daughter identified as Bisoye were brought dead and were moved to the mortuary by the State Environmental Monitoring Health Monitoring Unit, ” Kehinde said in a statement, a copy of which was obtained by the News Agency of Nigeria.

He commended the efforts of the State Fire Services, Nigerian Police, LASAMBUS, Rapid Response Squad (RRS) and the Red Cross for their prompt response and collaboration with LASEMA.

The spokesman said an investigation would be launched into the incident and advised owners and developers of buildings in the state to adhere to building codes and physical planning laws to advert disasters. (NAN)

Art exhibition to raise awareness on Hepatisis B holds in Abuja