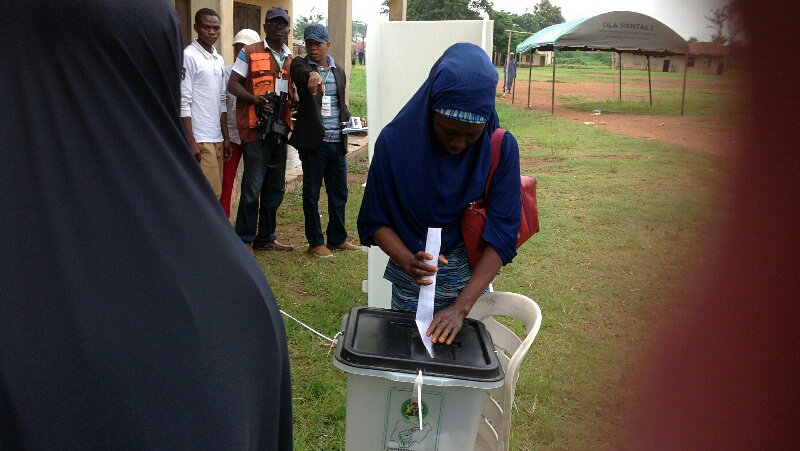 The victory of Governor Rauf Aregbesola of the All Progressives Congress, APC, in the 2014 governorship election in Osun is believed to have set in motion the eventual victory of the APC in the 2015 general elections across Nigeria.

However, now in Osun, the APC is in a battle for control of an area it once dominated.

Voters in Osun West senatorial district will today (Saturday) choose their representative at the red chamber of the National Assembly after the former occupant, Isiaka Adeleke, died in a controversial circumstance in April.

It is a straight fight between the Peoples Democratic Party’s Ademola Adeleke, who is the younger brother of the late senator, and Mudashiru Hussein of the APC although there are nine other political parties involved in the election.

The late Senator Adeleke was of the APC, a party his younger brother dumped during a controversial primary process to challenge its candidate.

PREMIUM TIMES’ Oluwole Josiah brings live updates of the election which has already lived up to its reputation as keenly contested.

Accreditation and voting are going on at the same time.

A statement from the APC security room says the thugs are unleashing mayhem on the people.

“There are reports of invasion by thugs of the PDP at Igbokiti Unit, Ward 10, Okinni, Egbedore LG as there is no single security personnel available,” it said.

10.04am: There are issues of card readers effectively scanning the fingers of some people at Ademola Adeleke’s polling unit 2 ward 2 in Ede north which has a total of 586 registered voters.

The affected voters had to fill the incident form.

10.06am: PDP candidate, Ademola Adeleke, votes. He says he is 100 per cent confident of victory. He says the morale his high in the camp of his supporters in spite of all the allegations making the round.

10.08am: He also expresses satisfaction with the electoral process so far, hoping that it continues that way till the end of the election.

10.09am: There are reports that the card reader machine at Unit 7 ward 7 in Aboto in Ede North has malfactioned but INEC officials are making efforts to fix the problem.

10.10am: Unit 3 Ward 7 in Ede South LG has incomplete ballot papers. Presiding officer says there are 547 registered voters at the unit but only 544 papers were supplied.

There is however calm at the unit as security officials are on hand to ensure no breakdown of law and order.

He expresses hope that he will win the election.

Voters are queueing to collect food at the polling centre.

He said this after casting his vote at the unit 1 ward 4, Ilupeju in Ejigbo.

1.29pm: Matriach of the Adeleke family, Moddupe Adeleke, has commended the election saying it has been peaceful.

The immediate younger sister to the late senator also is certain that her brother would win the election.

1.30pm: Heavy deployment of security men has been done at Igbokiti in Egbedore LG where hoodlums threatened to unleash mayhem.

PREMIUM TIMES can confirm that the hoodlums were chased away but had to remain at different positions in the town.

1.32pm: The Commissioner of Police, Fimihan Adeoye, said although there were rumours of hoodlums attacking polling units, saying the fact was that there were no actual incidents.

He said all arrangements had been made to make sure voting continued unhindered and results were collated and transported to collating centres.

2.23pm: The Osun State NYSC Director, Emmanuel Attah, has commended the performance of corps members so far in the ongoing senatorial election.

He also appreciated the level of confidence the people have on them.

According to him, the corps members had been well mobilised and all funds due to them would be paid as soon as the election was concluded.

Some of the polling units visited recorded low turn out when weighed against the number of registered voters.

At unit 02 Ward 10 at Egbedore LG, only about 200 persons actually voted at the unit with about 1500 registered voters.

Jubilation in Osun West as PDP takes early lead at Egbedore. PDP supporters go on the streets expressing their joy for the results announced so far.

This is even as majority of the results are yet to come out from high voting areas.

4:23 PM PDP and APC canidates in the Osun West election, Ademola Adeleke and Mudashiru Hussein, won in their respective units at the count of the votes.