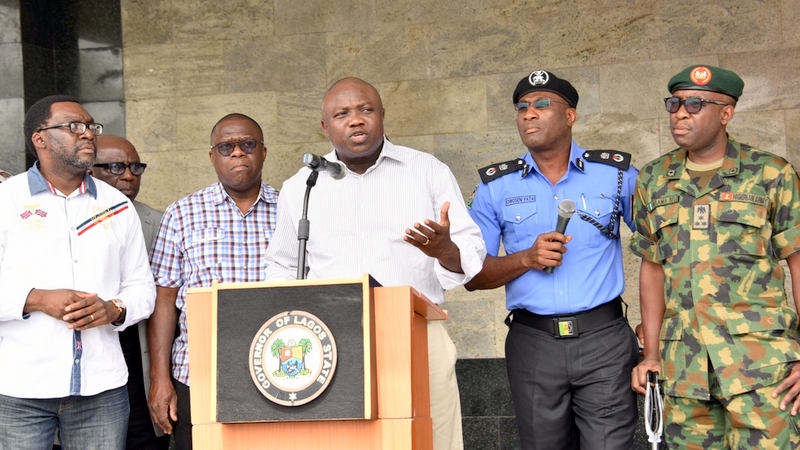 Lagos Govt. has abandoned us – Parents of kidnapped students

Parents of the six students kidnapped at the Lagos State Model College, Igbonla, Epe, on Saturday said the government had abandoned them to their plight.

The parents, who spoke exclusively with PREMIUM TIMES Saturday morning, lamented the poor attitude of the government towards rescuing the kidnapped students.

While narrating their ordeals, the parents sought to remain anonymous in their individual comments because of the safety of their kids.

They, however, disclosed that the kidnappers were demanding N100 million as ransom, as against the N400 million they had initially asked for.

They said they could not afford the money, adding that the kidnappers said they would only want to negotiate with the government.

“We are retired civil servants, fishermen, pensioners…there is absolutely no way we could raise N100 million and the government has said that it was not going to negotiate with kidnappers, so we are in confusion,” an elderly man who spoke on behalf of the rest of the parents, said.

“This is about the 10th day that the kids have been kidnapped. We need help.”

When asked about the role of the police thus far, he lamented the poor manner the case was being handled, stating that they had been “abandoned” by all agents of the state.

“Have the police met with the parents of the kidnapped kids?” he asked rhetorically. “They have not. Everybody, the police, the school authority, the government, the ministry of education, everybody… they’ve all abandoned us!

“We cannot raise a N100 million; that’s the problem now.

“I believe the police have expertise to negotiate this kind of thing even if it is covertly. They have criminologist…

“The lawmaker that was kidnapped recently, there was a way they did it. That’s only one life, we are talking about six lives here. That man wasn’t held for more than three days. Possibly somebody negotiated and the man was released,” he said.

When prompted about the resolve of the government not to negotiate with the kidnappers, the parent condemned the position, saying what’s important is the safety of the students.

“We are canvassing for the release of our kids, however they want to do it but we all know it can’t be done by force now because the kids are with them.

“The only option we have right now is to negotiate and get them out,” he told PREMIUM TIMES.

A mother to one of the students who also spoke to PREMIUM TIMES said the kidnappers have resolved not to call them (parents) again.

“They only call and they don’t speak for more than three minutes,” she said.

Narrating their ordeals, another man who is also a parent to the kid, said two among the mothers of the kids have collapsed twice, while seeking for help.

PREMIUM TIMES also gathered that many of the parents are not based in Lagos, which makes it more difficult for them to cope with the crisis.

“When we took our children to the school we were given guarantee that they were safe,” said one of the parents based outside Lagos.

“If anybody had told me that my son is not safe, believe me I won’t drop my kid there.

“We are all tired of all negotiations with these people because they no longer listen to us. And if government refuses to come to our aid now, who else will do it?”

A mother who spoke to PREMIUM TIMES in Yoruba called on the media to help inform Nigerians about their plights, describing the silence generated by the issue as worrisome.

“Today makes it 10 days that they’ve been outside. It’s raining heavily and we don’t know how they feel,” she said, amid sobs.

“When they called yesterday, they were crying for help, calling on us to come rescue them.

“They said they are not going to call us again and this weekend if they do not get the money, they are going to use the kids for sacrifice in their village. I don’t know why the government is so insensitive.

“Please o, anyhow you media men can do it. We are on our knees,” she said, weeping profusely.

Meanwhile, according to the spokesperson of the parents, the kidnappers do not want the parents to come in anymore. They only want to negotiate with the government.
“But we have not even seen the government (officials) and they have not contacted us at all,” he explained.

One of the fathers of the kids who was apparently enraged, lambasted the government for being insensitive, stating that there is no government in Nigeria.

“There is no government in this country. It’s only when it happens to you that you know,” he lamented.

“Since this incident, those boys have been held under guns inside the creeks. The government abandoned us; they don’t talk to us. The security of the people is the priority of any serious government.

“Even the deputy governor who is in charge of education…nobody is doing anything. When we called them they said we should call police,” he said.

“We have been trying to contact CNN for days; if it were their children, would they allow it go like this? Please help use your forum to make this government rise up to its responsibility.

“Even if it is not a government-owned school, a responsible government would have taken serious action on this,” he lamented.

When contacted Saturday Morning, the Lagos State Police Command however denied that kidnappers of the students resumed negotiations with affected parents.

The Command also said that it was not informed of the reduced ransom of N100 million demanded by the kidnappers.

When confronted with PREMIUM TIMES findings, the police spokesperson, Olarinde Famous-Cole, told PREMIUM TIMES he was not aware of the development.

“I am not privy to such information and we don’t negotiate with them,” he said.

“Yesterday, they said that students have been released. I am saying that we do not negotiate or communicate with such people so there is no way I will be getting information from them,” he added.

Mr. Famous-Cole explained that the Lagos command would convene a meeting on how to combat crime in the state, adding that the command would ensure the students regain their freedom from the kidnappers.

The affected students were abducted at around 5 a.m. on May 25 by unknown gunmen, who arrived through a creek behind the school.

The hoodlums broke through the school’s fence to gain access into the premises.

The incident occurred seven months after gunmen kidnapped two teachers and four pupils of the same school, although the victims were later freed.