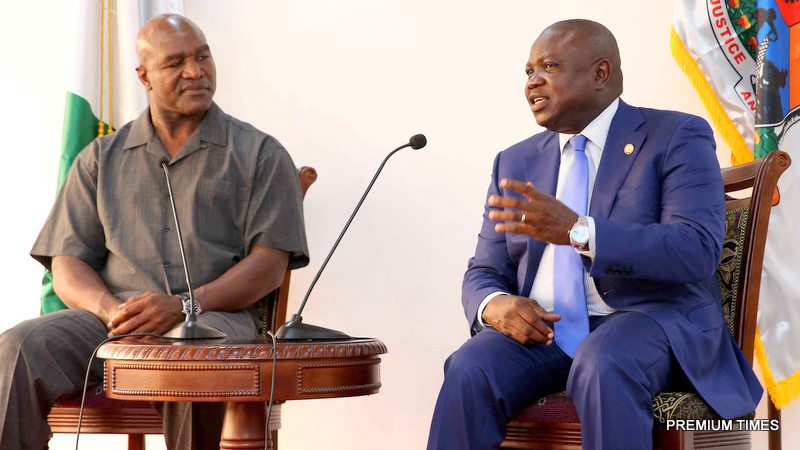 Holyfield, who announced the donation during a courtesy visit to Gov. Akinwunmi Ambode at the State House in Alausa, also said that the foundation would be established in the state.

The News Agency of Nigeria (NAN) reports that the former world Champion will be engaging in a Charity Rumble Fight with a national leader of the All Progressives Congress (APC), Bola Tinubu, where Mr. Ambode would act as a judge.

Holyfield said that the gesture was part of his strategy of giving back to the society.

He noted that giving back to the society would help children who had interest in sports to actualise their dreams as he was able to do.

Holyfield said his visit was to give kids the basic knowledge in boxing and inspire them on how to maintain a winning attitude.

Holyfield, who narrated how his mother supported his boxing career, said that his mother often advised him to hold on to what he was good at and never quit even when the tide was not good.

He said: “I held on to those words and they assisted me in becoming world heavyweight champion today. I believe that the kids should be inspired just like my mother inspired me to hold on tenaciously to those things I am good at.”

Responding, Mr. Ambode assured Holyfield that the state government would partner the foundation to achieve its aim in the country especially in Lagos State.

The governor said the essence of leadership was to inspire others to achieve their potentials in their chosen field.

According to Mr. Ambode, now is the time to give boxing its pride of place in Nigerian sports.

Mr. Ambode expressed appreciation to Holyfield foundation for the gesture and also thanked him for being in town for the Lagos @ 50 celebrations.

He reigned as the undisputed champion in both the cruiserweight and heavyweight divisions, being the first and to date only boxer in history to do so, which earned him the nickname, “The Real Deal”.

Holyfield won a 1997 rematch against Mike Tyson, which saw the latter disqualified in round three for biting Holyfield on his ears.

During this reign as champion, he also avenged his loss to Michael Moorer and reclaimed the IBF title.

In 1999 he faced Lennox Lewis in a unification fight for the undisputed WBA, WBC, IBF, and lineal titles, which ended in a controversial split draw. Holyfield was defeated in a rematch eight months later.

The following year, he defeated John Ruiz for the vacant WBA title, becoming the first boxer in history to win a version of the heavyweight title four times.

Holyfield lost a rematch against Ruiz seven months later and faced him for the third time in a draw.

Holyfield retired in 2014, and is ranked number 77 on The Ring’s list of 100 greatest punchers of all time.

Boxing Scene also ranked him the greatest cruiser weight of all time.