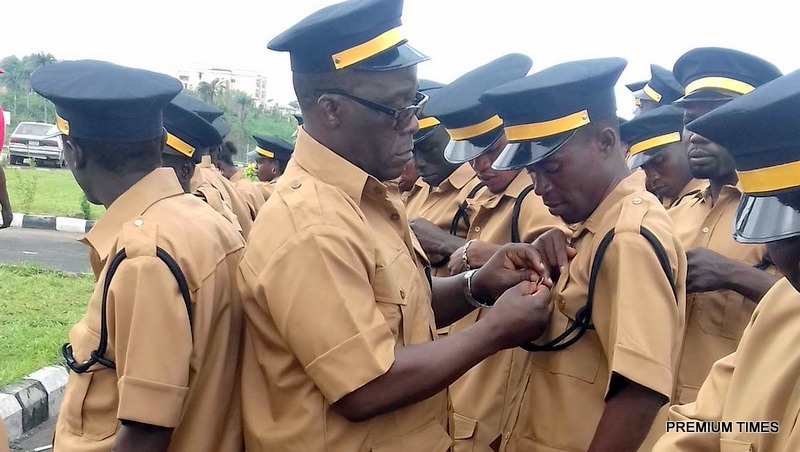 The marshals being inaugrated

Osun to flood public schools with marshals to enforce discipline

In its bid to restore sanity to the education system and enhance teaching and learning process in all the public schools across the state, the Osun State government is set to deploy 600 Education Marshals to all public schools in the state.

The scheme, when fully constituted, will help curb all forms of indiscipline and moral decadence among pupils and staff of public schools, the state government said in a statement emailed to PREMIUM TIMES.

The Bureau of Communication and Strategy in the office of the governor quoted the Executive Chairman, Osun Education Quality Assurance and Morality Enforcement Agency, Isiaka Owoade, as saying the state would launch the discipline team as part of efforts to eliminate the human factors hampering teaching and learning in the schools.

The statement signed by the Director of the Bureau, Semiu Okanlawon, quoted Mr. Owoade as saying the decision was taken to ensure quality assurance in the education system so as to complement the huge investment made by the state in the sector.

Mr. Owoade, who identified gross indiscipline, moral decadence and nonchalant attitude among students and teachers as factors militating against educational growth and development, said no effort would be spared to achieve high sense of discipline and bring out the best in every pupil and student of public schools in the state.

He identified indiscipline between and among staff, pupils and students as one of the major factors negatively affecting educational outcomes in the state.

According to him, the present administration in the state has invested huge sums of money in education infrastructure, teacher recruitment and training.

“But one major factor that has been proven to affect educational outcomes negatively is indiscipline among both the staff and students,” Mr. Okanlawon said.

“So, it is however very important that the human factors that affect learning and teaching be attended to in order for the investment in education to yield positive results.

“In order to accomplish this, our agency which is being saddled with the task of ensuring that the teachers perform maximally and that the standard of teaching is high, resolved to take this decisive action to return our schools to path of greatness.

“We have a core of trained Education Quality Assurance officers that will see to it that the students imbibe the right kind of attitude to maximise educational accomplishment.”

The Chairman of the agency said the Marshals would be organised as foot patrol teams to monitor the streets to discourage truancy, loitering and other forms of anti-social behaviours by public school students when they are supposed to be in school.

“The Marshals will follow up on any accosted pupils to his/her homes and/or schools. The Marshals will also patrol individual schools to assess and report on the disciplinary tone of the environment.

“Points to monitor and report on in schools include unattended classrooms, students loitering and whether meaningful teaching and learning is taking place.

“The overall objective of the scheme is to help government and the school authorities maintain discipline and enhance teaching and learning,” he added.

Mr. Owoade disclosed that the Marshals would be trained with relevant sections of the Child Rights Act; basic children psychology (how to deal with difficult children), various manifestation of indiscipline, ethical issues in dealing with children as well as how to relate with the other law enforcement agencies.

The new measure by the Osun government appears similar to the step taken by the Olusegun Obasanjo military administration between 1976 and 1979 when retired soldiers were deployed in schools to enforce disciplines.