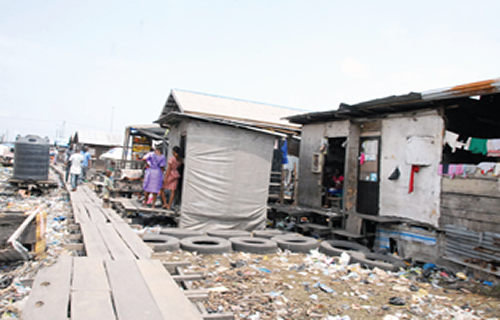 The Lagos State authorities must take immediate steps to provide alternative accommodation for as many as 30,000 people who were made homeless, in direct contravention of a court order, when their homes were deliberately set alight in the Otodo Gbame community in Lekki, Lagos, Amnesty International said today.

Although it is unclear who started the first fire on the morning of Wednesday, November 9, eyewitnesses have told the organization that police present did not attempt to stop the fire. Instead, they said they were chased away by police officers when they attempted to put it out. After the fire stopped in the afternoon, the police and a demolition team returned overnight with a bulldozer. Eyewitnesses say that the police then started the fire again, forcibly evicting thousands from their homes. At no point were fire-fighters seen.

“Thousands of residents of Otodo Gbame watched in horror as their homes and possessions were destroyed literally overnight, and their futures plunged into uncertainty. What makes this especially shocking is that on Monday this community was granted an injunction preventing the Lagos State Government from proceeding with the planned demolition of the informal settlements along the State’s waterfronts – the authorities involved in this destruction are in flagrant violation of the law,” said Amnesty International Nigeria’s Researcher Morayo Adebayo.

“We are therefore urging the Lagos State authorities to immediately establish a commission of inquiry to investigate the shocking incident at Otodo Gbame, and provide adequate housing and compensation to all those who have lost their homes.”

Amnesty International spoke to eight residents who described what they saw in recent days.

Eyewitnesses reported that the chain of events began on Monday, November 7 with a “scuffle” between youth in Otodo Gbame and youth in a neighbouring community. The “scuffle” escalated on Wednesday morning and resulted in a fire. A statement by police said they had intervened at that point to “restore calm”.

A 22-year-old woman said that on Wednesday morning, she saw youth setting fire to the homes, and that the police had prevented them from intervening or collecting their belongings:

“We [tried] to pack our things but the police [stopped] us, when we tried to pack; they [threatened to] shoot us […..] we all left empty-handed.”

By the afternoon of November 9, approximately a third of the community was already destroyed by the fire. A witness told Amnesty International that the fire stopped around 1.30 p.m., although there was still smoke in the community.

Later that night, at about 11.30 p.m., the police returned with a bulldozer and began demolishing the remaining houses. Eyewitnesses told Amnesty International that they also set houses on fire as part of this forced eviction, which continued into late in the afternoon on November 10. One witness told Amnesty International that after the bulldozer demolished their houses, the police set the rubble on fire. Other eyewitnesses also said that the police were setting fire to houses that were still standing.

A 39-year-old Otodo Gbame resident described to Amnesty International the chaos that ensued when the destruction unexpectedly resumed overnight on Wednesday:

“Police were firing guns [into the air], everybody was running helter-skelter so they had to run for dear life […] They did not allow anybody to rescue his property, everything was burnt. I was only able to rescue [a] few [items]. Most of the property that was burnt is my wife’s property, clothes and children’s clothes. I have [a] TV and other things; they were burnt down.”

The same man also reported that he saw people falling into the water in the panic, including young children who were apparently unable to swim. Other residents also told Amnesty International that several people drowned, although the organization could not verify this.

“In the middle of the night, I was sleeping when somebody came to wake me up, [saying] that there was a bulldozer in the community. I had to come out and walk to a place where I can be safe and [watch] it. The bulldozer was working [clearing houses]. They [the demolition team] began to set fire to the houses they had cleared already.”

Amnesty International confirmed with the Public Relations Officer of Lagos State Building Control Agency (LASBCA) that the agency was part of the demolition team sent to Otodo Gbame.

A police statement made on November 10 also confirmed that the “State Ministry of Physical Planning and Urban Development would move in to demolish the remaining shanties and clear the rubble caused by the inferno.”

Residents told Amnesty International that this morning (November 11), policemen returned to demolish the few remaining structures. With police back at the site, there are growing fears that the neighbouring community called ‘Chisco Ikate’ will also be destroyed. A resident from this community told Amnesty International a demolition team arrived this morning with a bulldozer.

In October the Lagos State authorities announced plans to demolish all irregular structures in waterfront communities across the state, which could leave hundreds of thousands of people homeless and destitute. They alleged the settlements are a ‘security threat’, linking them to a rise in kidnappings in the area. However, the authorities failed to provide any details on the process and how people would be rehoused.

Amnesty International is calling for an immediate end to destruction of any houses in the Otodo Gbame and neighbouring waterfront areas, and a moratorium on mass evictions within Lagos State until there are regulations in place to ensure that such evictions comply with safeguards that are required under international law for any eviction to proceed.

These standards prohibit evicting people at night and the deliberate destruction of property including through arson. The deliberate burning of people’s houses and structures during the demolition exercise by the police may constitute cruel, inhuman and degrading treatment for which suspected perpetrators must be brought to justice as a matter of urgency.

“The wave of mass forced evictions across Lagos’ waterfront communities is shattering lives. We are calling for the State authorities to respect their obligations under international law by stopping these demolitions, and providing alternative housing for all those already made homeless,” said Morayo Adebayo.

More than two million people have been forcibly evicted from their homes in different parts of Nigeria since 2000. These evictions are carried out without adequate prior consultation, adequate notice and compensation or alternative accommodation. Most were already marginalized and many had lived for years without access to clean water, sanitation, adequate health care or education.

Nigeria is a party to the International Covenant on Economic, Social and Cultural Rights (ICESCR) and other international and regional human rights treaties, which require it to realize the right to adequate housing, and to prevent and refrain from carrying out forced evictions.