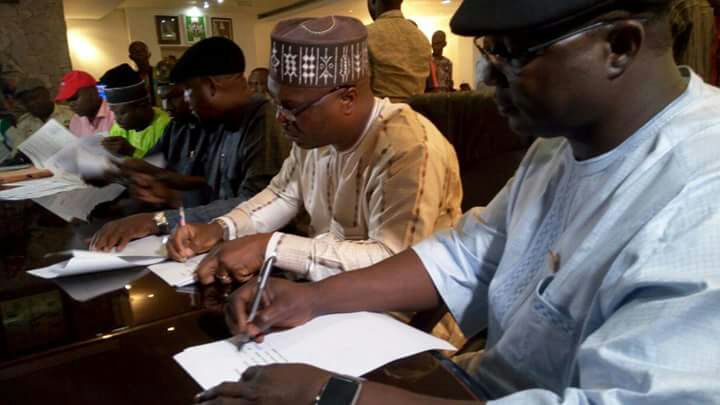 Ogun State workers on Wednesday night suspended their two weeks‎ old strike, after a prolonged meeting between the union leadership and the state government.

The meeting was, however, silent on the sack and suspension of labour leaders by the state government.

The governor was accompanied by his Deputy, Yetunde Onanuga; Head of Service, Sola Adeyemi; Secretary to State Government, Adeoluwa Taiwo; and Commissioner for Finance, Wale Osinowo.

The labour leader was accompanied by the President of the Trade Union Congress, TUC; and the head of the Joint Negotiating Council, JNC.

At the end of the meeting, a Memorandum of Understanding, MoU was signed between both parties.

The 8-point communiqué agreed that the state should pay all deductions with the November 2016 salary, and release further salary deductions every 90 days. Also, as soon as the state’s revenue improves, outstanding deductions shall be paid on or before May 2017.

*Immediate offset of one year arrears of check off dues, outstanding gratuities to be offset with N200 million every other month effective from November 2016, a joint committee for both government and labour should be set up to look at issues of contributory pension scheme and submit the report to the government within 90 days.

*2015 promotion result to be released immediately, a joint committee on both government and labour should be set up to look into the issues of officers that have completed loan payments and whose money are still being deducted.

*Also officers that have completed loan repayment should be allowed to exit from the cooperative societies. Towards promoting industrial harmony, there should be instituted a quarterly meeting between the government and labour.

*Consequent upon the above, the two sides agreed that the ongoing strike action should be suspended and no worker will be victimized on account of the strike action.

Although the meeting was silent on the fate of the sacked 16 labour leaders including Mr. Ambali and the other 19 suspended staff, Governor Amosun indicated it would soon be resolved.

It is a family issue and will soon be resolved, the governor said when asked of the fate of the dismissed staff.