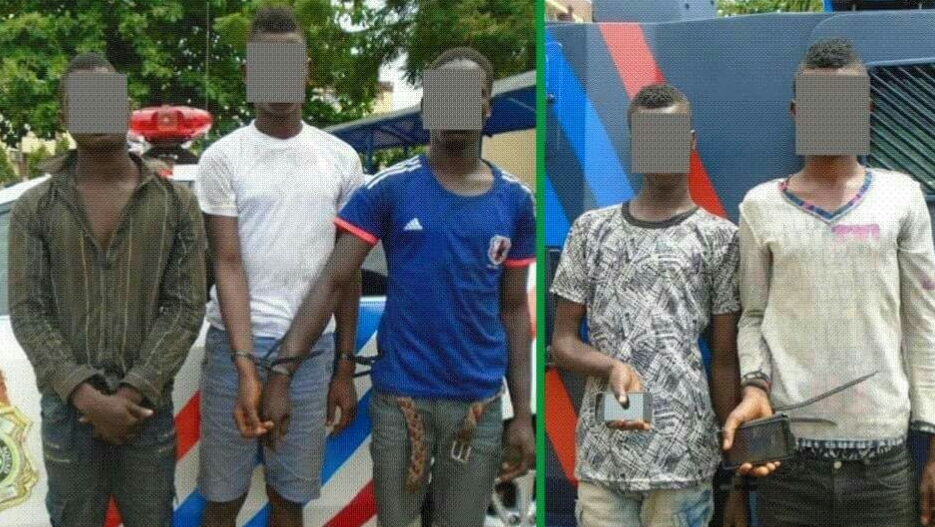 The Lagos State Police Command has arrested six teenagers for allegedly dispossessing commuters of their mobile phones and belongings.

In a statement on Sunday, the police quoted one of the suspects, Mr. Rahman, as saying they were over 50 of them involved in snatching people’s valuables in the area.

“We are always in Oshodi-Oke, from morning till late night,” the police quoted the suspect as saying.

“Some of us genuinely help people to carry their loads while a lot of us are there to snatch handbags, phones and other valuables from people.

“At times, we pretend to be helping them but our focus are their valuables. Most times, we work in groups. While the other is helping out, another person is stealing the victim’s valuables either from bag or pocket.”

The suspect also said some of the robbers forcefully dispossess passers-by of their belongings.

“I have been sleeping in Oshodi Under Bridge since 2013,” said Mr. Rahman, who added that hew grew up in a broken home.

“I work as conductor and whenever am not, I am with my peer to rob and snatch valuables in Oshodi,” he said.

“We were three when we stole the Microsoft phone from a lady’s bag. We pretended to be helping the lady to get a bus meanwhile, our intent was her phones. I have been committed to 13 month rehabilitation by the Lagos State Taskforce but my home is in Oshodi Under Bridge.

His victim, Sarah Obende, an undergraduate of the University of Lagos, said she thought she had lost her phone.

“I discovered it was missing immediately I boarded a bus in Oshodi. I received a call in the evening that I should come to Alausa to collect my phone,” Ms. Obende added.

Another suspect, Sadiq Adebayo who was allegedly in company of two other boys while stealing an iphone and a phantom Tecno phone from a car, it was two of his accomplices that stole the phones.

“We have sold the two phones along with seven other phones to Tuwo in Idi Oro, Mushin. They gave me N7,000 from the proceeds,” he said.

Four of the remaining suspects, namely: Timilehin Oluwaseun, Ogundare Moyinoluwa, Toheeb Tijani and Adeleke Sodiq were all separately apprehended while stealing phones and purse from commuters in similar circumstances, said the police.

Responding to the development, the Police Public Relations Officer, Dolapo Badmos, said police would leave no stone unturned in getting rid of criminal elements within the State, urging parents to monitor the activities of their wards and children.

The police said the suspects have been transferred to Lagos State Taskforce.