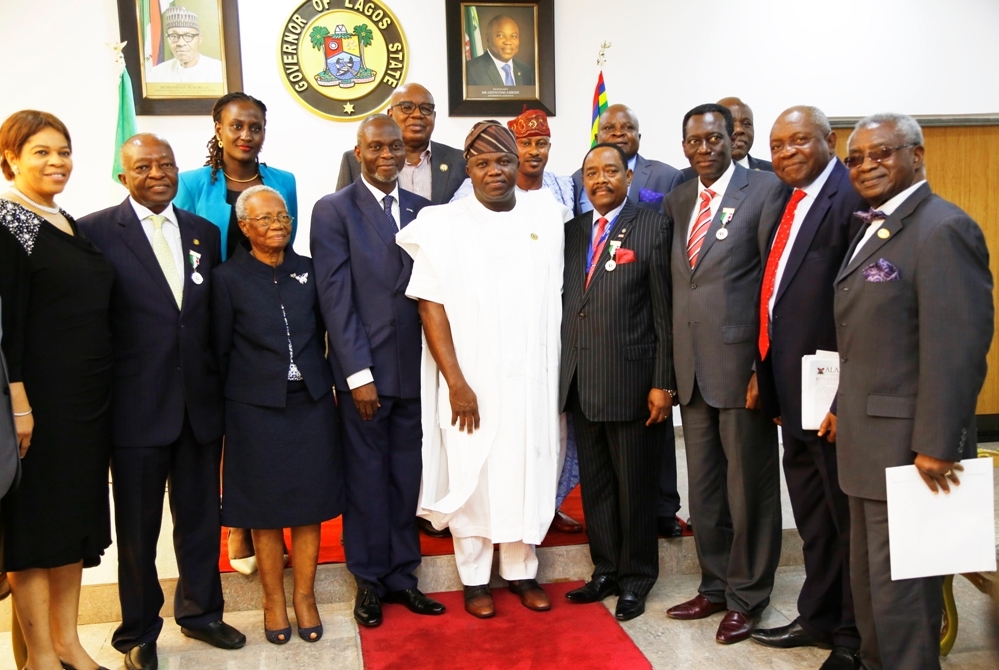 L-R: Lagos State Governor, Mr. Akinwunmi Ambode (middle), in a group photograph with the Executive Council of the Nigerian-British Chamber of Commerce during a courtesy visit to the Governor, at the Lagos House, Ikeja, on Tuesday, October 25, 2016.

The Lagos State Governor, Akinwunmi Ambode, on Tuesday expressed delight at the emergence of Lagos as the fifth largest economy in Africa, just as he said his administration is in the process of setting up an Economic Management Team comprised of distinguished individuals from the private sector and the public sector to manage and scale up the successes recorded in that direction.

Governor Ambode, who spoke at the Lagos House in Ikeja when he received a delegation from the Nigerian-British Chamber of Commerce on courtesy visit, said the emergence of Lagos was very instructive, adding that government would explore synergy with private sector with the view to catapult Lagos into a true global city-state in the true sense of the word.

“Very soon we would be setting up what we would refer to as an Economic Management Team to drive the fifth largest economy, because that’s the way we need to envision our self. And this Economic Management Team will involve nominees from the Chambers and other people in the private sector, so that we can collaborate because majorly this economy is driven by the private sector. Our duty is to create an enabling environment and fuse all that together, I think that synergy can just catapult Lagos into that global city state that we want it to be,” Governor Ambode said.

The Governor said there was no doubt about the fact that the economy of Lagos was in the hand of the private sector and the willingness on the part of government to ensure an enabling environment for businesses to thrive, which according to him, was why his administration has been investing massively in security and other business incentives.

According to the Governor, his decision to come up with the Office of Oversees Affairs and Investment, otherwise known as Lagos Global, was part of efforts at encouraging investment in Lagos both from within and outside, among many other initiatives of the present administration.

“Because our economy is in the hands of the private sector and we are willing to allow them drive it, that is why we have decided to formulate policies and decisions that will make the private sector to thrive in this State and that is why in the last 18 months, we have been running this administration on a tripod of security, job opportunities and infrastructure development.”

While explaining the tripod, the Governor said his administration believed that when the people and investors are well secured, businesses will thrive and more people would be employed, while the resources generated in terms of Internally Generated Revenue (IGR) would be deployed to provide infrastructure for the people.

Besides, Governor Ambode commended investors who have remained committed in doing business in Lagos despite the downturn in the economy, assuring that his administration would continue to work hard and partner with the private sector.

While justifying the recent joining of O’dua Investment Group by Lagos, the Governor said his administration was of the strong view that the socio-economic integration of western Nigeria depended majorly on Lagos, adding that it was better for states around Lagos to be equally prosperous to address migration issues.

Earlier, leader of the delegation and President of the Council, Dapo Adelegan, congratulated Governor Ambode on the emergence of Lagos as the fifth largest economy in Africa, adding that with the development, it was now important to globalize the economy of Lagos.

He said the Chamber would be willing to partner with the Lagos State Government not only to globalize the economy of the State, but also in the area of policy formulation, among other critical sectors.

Mr. Adelegan, who lauded the various initiatives of the present administration in terms massive investment in security, job opportunities, Light Up Lagos, road projects, among others, also announced the decision of the Chamber to inaugurate Governor Ambode as one of its patrons.

In a related development, Emir of Kano, Lamido Sanusi has lauded the Lagos State Government on the management of the economy of the state, especially in this period of recession.

Mr. Sanusi, who was the immediate past Governor of the Central Bank of Nigeria, said any country that depends on a mono product commodity like Nigeria is bound to fail.

According to him, Nigeria and other African countries have a lot to learn from how the economy of Lagos is being run, especially before the state gained oil producing state status.

The Emir, who spoke at a forum recently, commended the Akinwunmi Ambode-led administration in Lagos and urged the State Government not to allow its new oil status distract it from the very solid economic template it is currently running.

According to him, Lagos should emulate Norway, where all its oil proceeds are warehoused in a sovereign wealth fund and saved for the raining day.