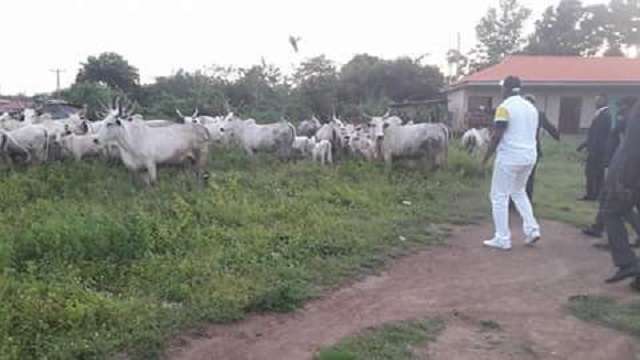 Governor of Ekiti State, Ayodele Fayose, on Thursday led a team of armed security men to enforce the state’s new anti-grazing law, when he came across herdsmen violating the law.

The law forbids open grazing, particularly outside designated areas and beyond 6pm.

Special Assistant to the governor on Public Communication and New Media, Lere Olayinka, said the cattle were found grazing along Ado-Afao road.

He said the two herdsmen grazing with the cows ran into the bush while youth pursued the cows and got one of them arrested.

“Governor Fayose was going to Ikole Ekiti today, he came across herdsmen along Afao Ekiti road, Ado Ekiti,” he said.

“The governor demonstrated the seriousness of the State Anti-Grazing Law by personally seeing to it that one of the cows was ‘arrested’ by youths who chased the cows after the herdsmen ran into the bush upon seeing the governor’s security men. The remaining cows ran into the bush too.”

The governor’s spokesperson also disclosed that the Ekiti Grazing Enforcement Marshals (EGEM) will start work in a few days’ time.

The law was enacted in response to the incident in March in Oke Ako in Ikole local government, where two persons were killed by herdsmen in a midnight raid.