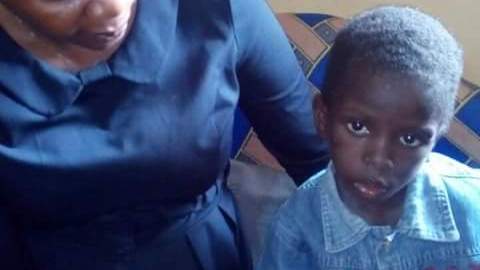 The police on Monday handed over to the Ogun State Government, the nine-year-old boy, Korede Taiwo, who was chained for weeks by his father.

The police spokesperson for the state, Muyiwa Adejobi made this known to PREMIUM TIMES in Abeokuta, the state capital.

Mr. Adeboji also said that the boy’s father, Francis Taiwo, and stepmother, Kehinde, would soon be charged to court.

This is coming just as the Child Protection Network, an umbrella body of Non-Government Organisations in the state, expressed commitment to collaborating with the government towards taking care of the boy.

Korede was chained in a room for over a month by his father, Mr. Taiwo, who is the pastor in charge of the Key of Joy Parish of the Celestial Christ, Ajinwo, Ota area of the state.

Speaking with PREMIUM TIMES, Mr. Adejobi said the boy did not want to live with his parents after he was rescued by security operatives.

“The officer in charge has just taken over the case today and we assure you that the command will do proper investigation and we won’t waste time on that,” said Mr. Adejobi.

“The man will be charged to court. The step mum is also a suspect in the case and so the command will charge two of them accordingly.

“The command was not happy that the boy was chained by his father for more than a month. If you look at the weight of the chain; coupled with the weight of the padlock, you will know it was heavy for that boy.

“The boy is a rugged person and I am very sure God has a purpose for sparing his life. By the time we rescued the boy, he couldn’t stand. He was so weak and he was only able to stand after the DPO took him to hospital for treatment.

“It is a terrible case. Apart from being criminal, it is also inhuman. The command condemns it in totality and the AIG has directed that the matter be thoroughly investigated.

“We want to assure members of the public that the matter will be thoroughly investigated and we want to take the case very seriously because it must serve as deterrent to those who would want to do the same thing,” he said.

An anti-human trafficking officer of the command, Oluwatoyosi Bello, handed Korede to officials of the Ogun State Ministry of Women Affairs and Social Development.

While receiving the boy on behave of the government, the Director of Social Welfare Services, Shotubo Olumide, assured that the ministry would take care of Korede.

In a confession, the boy’s father, Mr. Taiwo said he regretted his action, adding that he did not know the legal implication of his action.

“I didn’t know there is punishment for my action but now I know. I regret my actions. I want forgiveness from the government,” he pleaded.

Similarly, the step mother, Kehinde, pleaded with the government to forgive her and the husband.

“We used to advise him but because we didn’t know the implication at that time, that is the reason we chained him. I want to beg the government not to be angry again,” she pleaded.