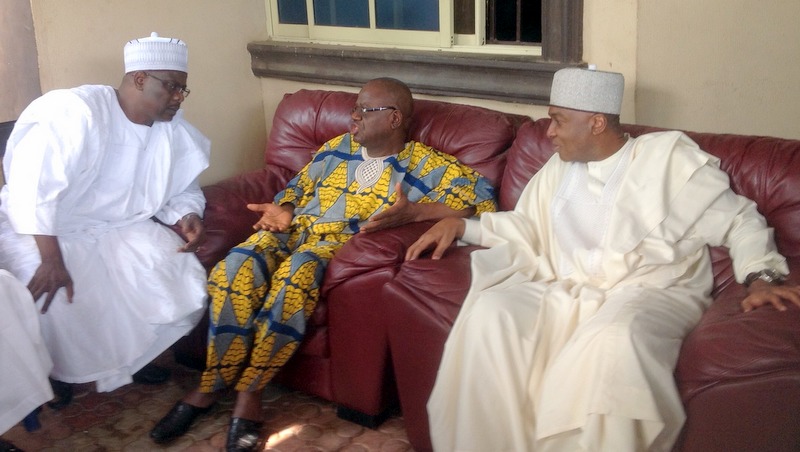 Senate Leader, Ali Ndume, (left) and President of the Senate, Bukola Saraki(right) console Tayo Alasoadura at his residence in Akure on Friday.

The Senate has urged the Nigeria Labour Congress to engage the federal government in negotiation to resolve the crisis over the increase in the pump price of petrol from N86 to N145 per litre.

The President of the Senate, Bukola Saraki, told journalists in Akure on Friday that it was the decision of the Senate that labour should return to the negotiating table to resolve the pending issues with the government.

Mr. Saraki was in Akure on Friday to commiserate with his colleague, Tayo Alasoadura, the senator representing Ondo Central Senatorial District, who lost his wife in a surgical operation on Thursday.

The NLC called a nationwide strike on Wednesday to force the federal government to reverse its decision to hike the price of the product.

The leadership of the senate met with Labour leaders and officials of the federal government on Thursday with a view to brokering industrial peace.

“We have already met with labour and we have encourage them to go back to the table to negotiate with government and find a way to address all the issues,” Mr. Saraki said.

The President of the Senate, who was in company with the Senate Leader, Ali Ndume and other lawmakers, sympathized with Mr. Alasoadura, whose wife, Olajumoke, died shortly after an operation in an hospital in Ore.

Mr. Saraki said the loss was painful and that the delegation from the National Assembly came to identify with the grieving senator.

He said only God knew why her death occurred at this point in time, praying that God would give the senator and his family the fortitude to bear the loss.