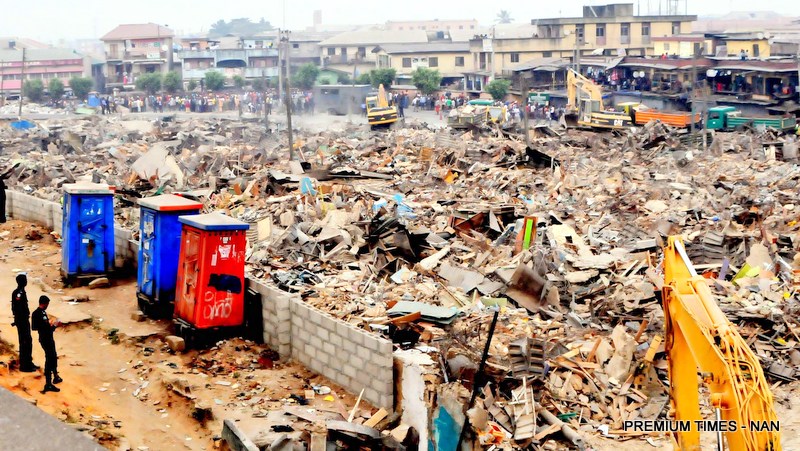 The demolition, which was supervised by the state governor, Akinwunmi Ambode, kicked off at about 7.45 am.

The governor was accompanied by the Commissioner for Environment, Babatunde Adejare, officials of Kick Against Indiscipline, the police and some other top government officials.

The Owonifari Market has been in the area for about 40 years.

The state commissioner of information, Steve Ayorinde, in a statement on Tuesday said the market would be shut due to security challenges in the area.

Mr. Ayorinde also said shutting the market would enable the state commence the transformation of the Oshodi bus stop to an ultra-modern bus terminal.

The commissioner also said traders in the market had been relocated to the newly built Isopakodowo market stalls at Bolade area in Oshodi.

He said the government had already commenced the fencing of the area from Agege Motor Road to PWD/Ikeja GRA end of the area.

He said the Oshodi bus stop would be transformed into an ultra-modern bus terminus with new bus shelters that are befitting of a structured park in a mega city.

He said the exercise would assist the federal government and the Nigerian Railway Corporation as the railway corridor will be beautified and safeguarded as street trading would be discouraged.

This is the second time in six years that the state government will be carrying out major redevelopment work at the Oshodi bus stop.

In 2009, Mr. Ambode’s predecessor, Babatunde Fashola, received praise for clearing the popular bus stop of street traders and miscreants, easing the traffic gridlock in the area.

However, the area soon degenerated into what it used to be as street traders and urchins returned, posing serious threat to lives and property in the area.

The bus stop is a hotbed of clashes between rival gangs and cult groups.