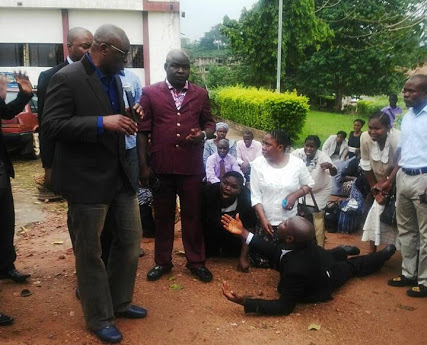 Fayose to punish 31 Ekiti civil servants for lateness to work

The Governor of Ekiti State, Ayo Fayose, on Monday recommended punishments for 31 civil servants who went late to work during the governor’s unscheduled visit to the state secretariat.

Mr. Fayose arrived at the secretariat in company of the Head of Service, Gbenga Faseluka, at 8.00a.m. ahead of the staff.

Some of the affected workers prostrated and knelt down to beg the governor for forgiveness.

But Mr. Fayose turned down their pleas, saying their conduct was unacceptable.

He directed his aides and the Head of Service to take the names of the affected workers, saying that disciplinary actions must be taken against them.

“If a labourer is worth his wages, the employer also is worth his services. I have warned workers in the state repeatedly about coming late to work or taking their jobs with laxity. Despite the paucity of funds, we have been regularly paying workers’ salaries,” Mr. Fayose said.

“If workers are paid regularly, the workers too must justify our efforts and work for the money they earn.

“There are many people out there searching for jobs. I want to take the workers by surprise and I will visit a lot of places. This will be a continuous exercise,” he said.

Mr. Faseluka, in his reaction, said since punctuality remained the soul of the business, workers must take their duties and coming to work on time seriously.

“It is a consummation of what we have been doing concerning punctuality on the part of workers. For the past few weeks, we have been emphasising on this. It is time to enforce discipline and we have to mete out sanctions on erring workers. When you issue circular, pleas and some people are recalcitrant you have to sanction them,” he said.