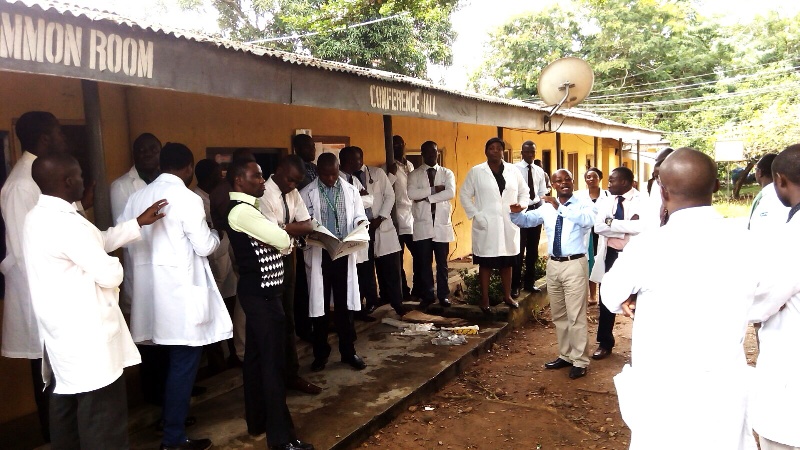 Patients at the Federal Medical Centre, Owo, continue to suffer following an industrial conflict between the Association of Resident Doctors
in the hospital and its management.

The association had embarked on a three-day warning strike last week to protest an alleged high-handed posture of the Dr. Adeniran Kolajo-led Interim Management and its mismanagement of funds accruing to the hospital.

PREMIUM TIMES learnt that the hostility was a carry over from the former administration after the doctors sought a court injunction to restrain the Dr. Omotoso-led management from discontinuing a federal government approved benefit.

It was gathered that Dr. Kolajo had issued letters of relocation to 17 of the doctors following their failure to meet up with the Residency Training Qualifications.

The doctors, however, held that the issuance of the letters was illegal and violated that nationally recognized residency training guidelines.

Dr. Kolajo was said to have refused to recognize the ARD and its leadership, saying its leadership was in default of the residency training certifications.

On Tuesday, the Interim Administrator ordered the evacuation of the doctors from their Lounge, which served as relaxation centre.

Furniture and other equipment and appliances within the lounge were thrown out even while it was raining, exposing them to serious damage.

A source at the hospital told our correspondent that the crisis was threatening the well being of patients whose fate had become uncertain as the doctors were threatening another strike.

“As I speak to you, the hospital is not functioning as it should be, putting the lives of the patients at risk,” the source said.

“Even some basic facility are not present, but the management is busy wasting resources on frivolous projects.”

The President of the ARD, Isaiah Oke, while speaking on the issue on Wednesday, said the association raised 12 allegations against Dr. Kolajo and his interim management, but instead of responding to the allegations, he issued administrative queries to 26 members of the association.

When PREMIUM TIMES contacted Dr. Kolajo on the phone, he declined to offer any response or comments.

The Chairman of the Nigerian Medical Association, Ondo State, Bamidele Butiku, told Premium that the union had waded into the matter, but the interim administrator had refused to dialogue.

“We called a meeting of the elders today(Wednesday) to seek the way out of the problems, he was invited,but refused to turn up,” Mr. Butiku said.

“We will continue to appeal for dialogue so that the problem can be resolved.”