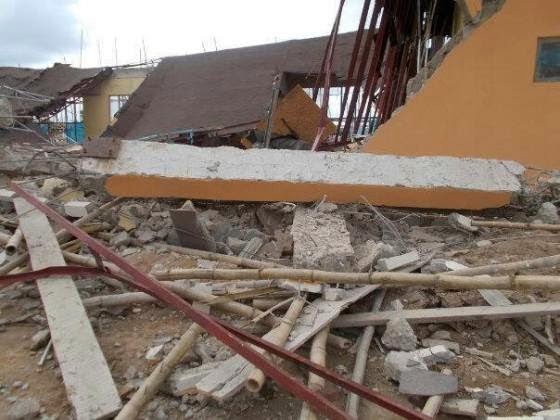 Less than one week after a building collapsed in Yaba, Lagos, another three-storey building on Wednesday collapsed in Ebute Meta.

About half of the building located at No. 29 Oloto Street, collapsed on the right side leaving the other half hanging dangerously over adjoining buildings.

The building has not been occupied since 2012 after a portion at the back collapsed forcing residents in front apartments to vacate.

A correspondent of NAN observed that rescue workers from the Lagos State Emergency Management Agency and Lagos State Building Control Agency were at the scene working.

The officials were using sledge hammers to demolish the building from the point of the partial collapse.

Some residents of the area expressed the fear that if the demolition was not properly carried out, it might endanger other buildings in the area.

A tenant in one of the buildings on the street, Folami Goriola, appealed to the state government to ensure a controlled demolition to safeguard other buildings.

Mr. Goriola said the occupants of No. 27 Oloto Str. where he resides had been given notice to run an integrity test a second time.

He noted that the test would ensure stability of their building which was adjacent to the remaining portion of the collapsed building.

“We are nursing the fear that the wrecks may fall over our building,” he said.

A witness, Femi Adagunduro, said the building collapsed in the early hours of Wednesday.

“The collapse happened at exactly at 5.28 a.m. precisely and I called the police emergency number and they responded immediately,” he said.

Mr. Adagunduro explained that the building had been marked for demolition since 2012 and that the occupants had made efforts to ensure it was pulled down without success.

He lamented that the building was a hideout for social miscreants and refuse dump posing danger to the people’s health.

Another resident, RotimiAzeez, said the back portion of the building had killed about 10 persons when it collapsed in 2012, leading to its being marked for demolition.

“The demolition was delayed till it collapsed after 5 a.m. in the morning today,’’ he said.

Efforts to get the reaction of LASBCA on the issue failed as an official told NAN that they were not allowed to speak to the press.

“We are not allowed to speak. Our General Manager and other executives came here this morning,” she said.

The General Manager, Lagos State Emergency Management Agency, Michael Akindele, told journalists that all buildings that had been served demolition notice in the area would be pulled down without delay.

“Let me assure those that their buildings have been marked for demolition that we have commenced the demolition.

“Once there are proofs that tests have been done, we will demolish such buildings,” he said.

Mr. Akindele said that the agency was already putting up a local system to overhaul emergency management to ensure more effective speedy response to all emergencies.

He said that the claim of residents that the collapsed building had earlier been marked for demolition in 2012 would be investigated and necessary action taken. (NAN)

NNPC moving $1.2b from banks to cover NLNG fraud – APC