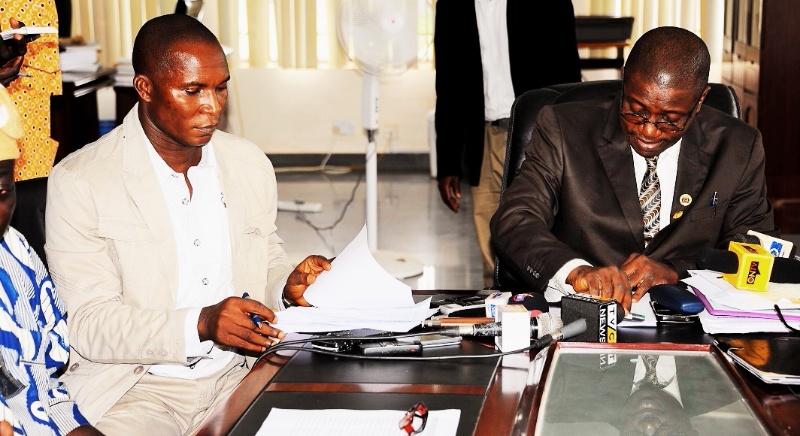 Workers in Osun State on Monday agreed to end‎ their six weeks of strike after reaching an agreement with the State Government on ​how their salaries backlog will be cleared.
​
The decision was reached after a Memorandum of Understanding was signed by both parties signaling the end of the industrial action.

‎
After the agreement was reached, the Chairman of the Nigeria Labour Congress, NLC, in the state, Jacob Adekomi, told journalists in Osogbo that the strike was called off in the interest of the state.

He said workers would resume work on Tuesday following ​the ​government’s show of commitment to paying workers in spite of the difficulties facing it.

He said, “The MOU we have signed today is agreed to by both parties taking due cognisance of the present parlous financial situation of the state government, on an interim basis, as a condition precedent to suspending the Strike Action.‎

“Committees will be set up according to the MOU aimed at screening, determination of the actual wage bill, and workers in the employment of the state, the actual number and actual monthly pensions’ bills of both Local Governments’ and State Government Pensioners.”

A statement by the Head of the Bureau of Communications and Strategy, in the Office of the Osun State Governor, Semiu Okanlawon, said labour leaders at the end of the meeting with government representatives at the Governor’s Office in Osogbo decided to ‎end their strike and return to work on Tuesday.

He said the state government had commenced the payment of backlog of workers’ salaries starting with January and February, 2015 for state workers and March and April, 2015 for Local Government workers.

According to him, other ongoing payments include primary school teachers, balance of pensions for state government for November 2014, outstanding pensions for January-February, 2015 for Retired Primary School Teachers and March, 2015 Pensions for Retired Local Government Staff.‎

“The Memorandum of Understanding (MOU) was signed by the State government, the Joint Public Service Negotiating Councils (JPSNC), the Nigeria Labour Congress (NLC), and the Trade Union Congress (TUC), of Osun,” Okanlawon said.‎