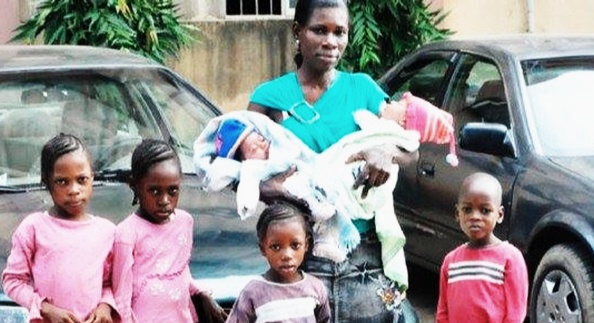 Woman with three set of twins

Lagos Govt. to assist mother of 3 sets of twins abandoned by husband

Governor Akinwunmi Ambode of Lagos State has directed that Ruth Uche, the mother of three sets of twins abandoned by her husband, be assisted in raising the children.

Mr. Ambode told his Deputy, Oluranti Adebule, that the rehabilitation and provision of welfare to the woman and her children should be done with immediate effect.

This is contained in a statement signed by his Chief Press Secretary, Habib Aruna on Friday.

NAN reports that the woman’s husband absconded from their home after the third set of twins was delivered.

Mr. Ambode said the directive followed newspaper publications which narrated the ordeal of the woman during her distress visit to the Government Secretariat, Alausa, on Thursday.

The governor said the wellbeing of the people of the state, irrespective of their ethnic, religious or political affiliation, remained paramount to his administration.

Mr. Ambode said his government would continue to provide good leadership that would guarantee adequate protection of lives and property of all residents.

“It is not proper for anyone to abandon his family, especially young children that they willingly brought to life.

“It is only when such children are properly taken care of that they can achieve their full potentials in life and become responsible citizens’’, Mr. Ambode said in the statement.

Benjamin Uche, father of the kids, is said to be a factory worker.