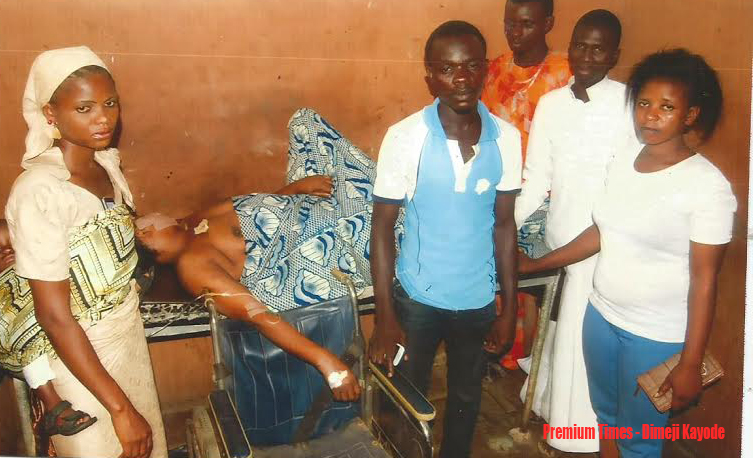 Woman in coma after bus accident ​ in Ogun​

A 55-year-old woman, Anifat Olalekan, was on Wednesday in Abeokuta, Ogun ​S​tate​,​ struck by a bus, who​se driver​ escaped the scene of the accident, leaving his victim in a coma.

Mrs. Olalekan, a petty trader, had left her home with her 9-year-old child at about 7.45pm to go buy medications for her sick husband.

She was crossing the dual carriage road in her neighbourhood area, when she was hit​ by a speeding commercial bus driver.
​​
She immediately lost consciousness, but her child miraculously escaped the crash.

However, the driver, in the ensuing chaos, escaped the scene of the accident, leaving his vehicle behind. The bus has been towed to a police station.

Meanwhile, residents and passers-by rushed the victim to the State Hospital, Sokenu, Abeokuta, where she was confirmed to be in coma due to the head injuries sustained from the accident
​.​

At the emergency treatment room of the hospital, medical personnel battled to revive the victim, but after four days on admission, she was referred to General Hospital, Ikeja, Lagos and from there to Lagos State University Teaching Hospital.

One of the children of the victim, Azeez Olalekan, who spoke with PREMIUM TIMES, said at LUTH they were told that there was no bed to admit the patient. He said they were then referred to a private hospital behind the federal hospital where they were rejected due to the level of his mother’s injuries.

He said, at this point, another private hospital, known as Beta Clinic at Ifo in Ifo Local Government Area of Ogun State was suggested to the family, where the victim was subsequently taken to and ​was receiving treatment as at the time of this report on Monday.

Azeez said the incident had taken a toll on the family’s finances and sought financial assistance from government, individuals and corporate bodies
​.
​“We have spent all what we have, and I am using this medium to appeal to good Samaritans, members of the public, as well as corporate bodies to come to our aid,” he said. “As I am speaking with you now, our mother is still in coma. Almost over two weeks now, and the driver who caused the havoc is nowhere to be found.”

His sister, Serifat, however, revealed that, through their own investigations, the family had identified the owner of the bus, a Riami Dauda. She also said she currently lived at the hospital with their mother and this had had adversely affected her business.