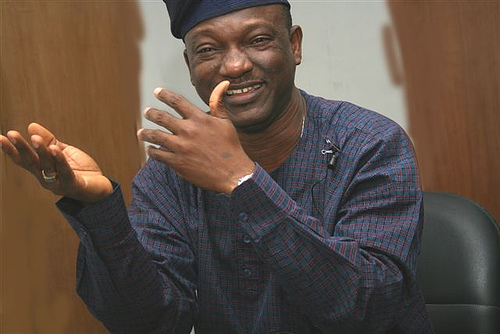 The Lagos State governorship election petition tribunal presided over by Justice Muhammad Sirajo, has granted leave to the All Progressives Congress to apply for inspection of documents before the pre-hearing session.

The Peoples Democratic Party governorship candidate, ‎Jimi Agbaje, had petitioned the tribunal, challenging the declaration of Akinwunmi Ambode of the APC as the winner of the April 11, 2015 gubernatorial election.‎

Mr. Agbaje in his suit alleged that he observed some irregularities during the election, which were in contravention of the provisions of the INEC’s approved guidelines.

At the tribunal Tuesday, the judge issued a directive that the applicant, its counsel and/or its agents should inspect and make copies of all polling documents or packets relating or pertaining to the conduct of the office of the governor of Lagos State election, held on April 11, 2015.

Mr. Sirajo gave an order compelling the 1st respondent (Independent National Electoral Commission), to make available to the APC, it’s counsel and/or agents, certified true copies of all such polling documents or packets in the prescribed form used and/or purportedly used for conduct of the election to the office of the governor of Lagos State held on April 11, 2015.

The tribunal also gave an order, allowing the applicant and/or its agents to inspect, by way of machine/electronic scanning, all ballot papers and other electoral materials, which were used in the conduct of the election to the office of the governor of Lagos State, held on April 11, 2015.

Prior to this development, counsel to APC, Charles Uwensuyi-Edosomwan (SAN), had informed the tribunal of the existence of the motion on notice, dated May 19, 2015, brought pursuant to section 285 (2) of the Constitution of the Federal Republic of Nigeria (as amended), section 151 (1) of the Electoral Act, 2010, paragraph 47 (1) (2) and (3) of the first schedule to the Electoral Act 2010 (as amended) and under the inherent powers of the tribunal.

The APC’s lawyer consequently prayed the tribunal to grant the application, which was not opposed by other counsels in the matter.

Mr. Sirajo on May 5, 2015 granted Mr. Agbaje leave to inspect all polling documents and devices used in the conduct of the election.

He also ordered INEC to provide certified true copies of all polling documents, including printed data in each polling unit, from the card reader machines.

However, the tribunal rejected Mr. Agbaje’s request to inspect the polling documents and devices used in the conduct of the March 28 Presidential Election in Lagos State.

The tribunal also rejected Mr. Agbaje’s freedom of information request asking the tribunal to order INEC to produce all polling documents and card reader machines used for the governorship election.

According to the panel, the petitioner can request for materials and documents he deems necessary to his case, by way of subpoena, when the tribunal has fully commenced proceedings.