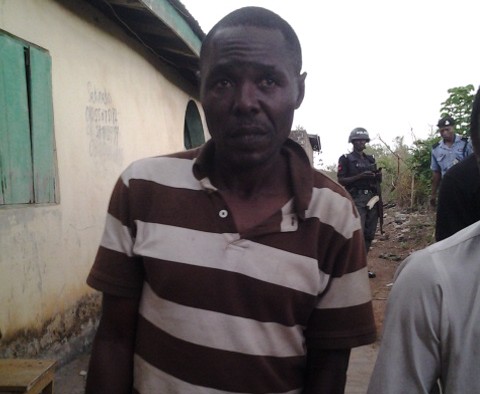 A serving All Progressives Congress, APC, councillor in Ogun State, Lateef Agboola, has been arrested alongside four other suspects for alleged kidnapping.

Mr. Agboola, who claimed to be from Ward 4 of the party, is a member of the legislative arm of Odogbolu Local Government Area.

In an interview with journalists, he said he regretted his involvement in criminality.

The arrest of the kidnap syndicate was effected on Friday, when the Special Anti-Robbery Squad led by Mohammed Tijani, a superintendent of police, stormed the gang’s hideout located in Oke-Sopin area of Ijebu-Igbo town in Ijebu North Local Government of the State.

Following the raid of the hideout, five of the gang members were arrested with a number of charms and guns, while two are still on the run.

The suspects in police custody as at the time of filing this report include: Lateef Agboola, Tunde Akilo, Sunkanmi Dacosta, Ahmed Adebanjo and Mukaila Olatunji

The arrested councillor in a statement to journalists admitted that his vehicle was used for the operation.

He said his younger brother, also a member of the gang but now on the run, got him involved.

“I regret my involvement,” he said. “My political career is finished. I only gave them my car when my brother told me the vehicle they used for the operation had flat tyre.”

All suspects admitted their operations within one month earned each of them a minimum of N300, 000 from ransoms paid by families of their victims.

A member of the gang, Tunde Akilo, told PREMIUM TIMES he squandered his share of the money.

The Commissioner of Police, Valentine Ntomchukwu, during his visit to the kidnappers’ hideout on Saturday said the building used by the gang has be taken over and sealed by the police.

He said investigations were ongoing, and assured that the fleeing suspects would soon be arrested.

He said all suspects would face the full wrath of the law.