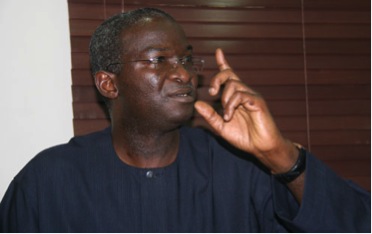 Governor Babatunde Fashola of Lagos State on Friday inaugurated a housing estate in Ogba area of the state and named it after the late pro-democracy activitist, Anthony Enahoro.

Performing the ceremony, Mr. Fashola said the 20-block estate was dedicated to Mr. Enahoro’s memory in recognition of his struggle for the enthronement of democracy in Nigeria.

Mr. Fashola said if not for the sacrifices made by the late activist and others like him, the democracy that Nigeria was enjoying today would have been a pipe dream.

He added that it was on the platform of that hard-fought democracy that he could deliver the housing project and executing other life impacting projects.

“This housing project is more than an estate; it is a symbol of democracy,” Mr. Fashola said. “This is because it is our democratic experience that allowed us to deliver this. The democracy we are enjoying today was fought for by some people. Some of the people made so many sacrifices for the enthronement of democracy and in the process lost their lives. One of such is late Pa Anthony Enahoro. As a mark of recognition for his struggle for the country and democracy, I dedicate this estate in his honour and memory.”

Mr. Fashola described democracy as the best form of government and urged citizens to guard it jealously by shunning acts that could truncate it.

He said that the delivery of the housing project was a demonstration of the commitment of his administration to reduce the housing deficit in the state.

He said that the estate comprising 240 housing units of one, two and three bedrooms, would be allocated to residents on a 10-year mortgage of not more than nine and a half interest rate.

Mr. Fashola said the allocation of all homes built by his administration on mortgage was to defeat the problem of affordability and enable home seekers own houses conveniently.

He said the project provided no fewer than 5,000 direct and indirect jobs. He noted that 13 construction companies handled the project and engaged 670 artisans and 780 casual labourers while the job lasted.

He disclosed that no fewer than 26 other housing projects were ongoing in Ibeshe, Igando, Sangotedo, Magodo, Badia and other locations. He said when completed, they would further boost access to housing.

The governor urged residents to vote for the governorship candidate of the All Progressives Congress, Akinwunmi Ambode, for the continuation of his administration`s developmental strides.

Peter Enahoro, the younger brother to the late activist, thanked Mr. Fashola for honouring the family.

He said the family would cherish the honour forever and commended the governor for all his interventionist strides in the state.

Earlier, Bosun Jeje, Commissioner for Housing, said that the project was another milestone in the delivery of decent housing in the state.

He said that the estate was fitted with facilities like electricity, community hall, paved compound, landscaping and playground.

“The commissioner thanked Fashola for providing all the encouragement for the realisation of the project and pledged government`s commitment to the provision of more decent houses.

EFCC ordered to arrest Tinubu, others to cripple opposition – APC