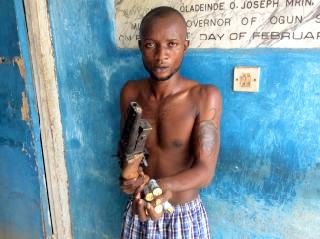 The Ogun State Police Command on Tuesday rescued a female kidnap victim, and also arrested a member of the kidnapper’s gang.

The Command’s Public Relations Officer, Muyiwa Adejobi, who confirmed the incident, said the operation was carried out by the Special Anti-Robbery Squad of the command which ambushed the gang.

He said the gang had kidnapped their victim, Abosede Adenuga, from Lagos State on Monday at 10.50p.m. and headed to their hideout in Ijebu-Ode in Ogun State.

Mr. Adejobi said the SARS operatives of the command, who had been deployed to police the Ibefun/Ikorodu road where the suspected kidnappers operated and hid their victim, were informed of the kidnapping by some informants.

He said the kidnappers met their waterloo when they were ambushed by the police at Imodi Ijasi along Ijebu Ode/Ikorodu road, rescuing the victim and arresting one suspect, Tunde Akilo.
The Command’s image maker said the kidnappers, who noticed police presence, jumped on a motorcycle to escape, but they were given a chase by the police operatives who used another motorcycle to pursue them before the arrest of the suspect, and rescue of the victim.

He disclosed that items recovered from the gang included one locally made cut-to-size double barrelled gun loaded with one live cartridge, four live cartridges, a Volkswagen car with Reg No MUS 471 AU used by the kidnappers and assorted charms.

The Commissioner of Police, Val Ntomchukwu, commended the men of the SARS who carried out the operation and members of the public who gave them the information of the incident.

He also directed that the matter be properly investigated while other fleeing members of the gang be apprehended without delay, while proper investigation into the matter will be carried out and that justice will be done.

The police boss also reiterated the command’s commitment to providing adequate security for lives and property of the people in Ogun State.

Insurgency will end in Nigeria – Expert