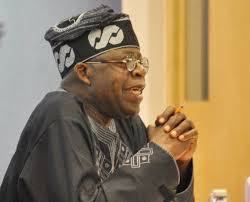 North should beware of Tinubu, he is treacherous – Fayose

Mr. Fayose described the former governor as a politician who would sell out anyone to achieve political gains. He said Mr. Tinubu was not honest in his support for the Mr. Buhari, the presidential candidate of the All Progressives Congress, APC.

“Knowing Buhari’s age, state of health and mental capability, Tinubu is only using him to achieve his target of high-jacking power from the North,” the controversial Ekiti governor said

Speaking through his Special Assistant on Public Communications and New Media, Lere Olayinka, Saturday, Mr. Fayose said, “A man who could sell out his own party candidates can sell out anyone given the right prize and political gains.

“Tinubu said with his own mouth at Onikan Stadium, Lagos on Saturday that he was instrumental to the victory of President Goodluck Jonathan in the 2011 general elections.

“He said: “In 2011, I helped Jonathan become President because he made us believe he was a breath of fresh air.”
The governor added that the implication of Mr. Tinubu’s statement was that he sold out the Action Congress of Nigeria, presidential candidate, Nuhu Ribadu, in 2011.

Mr. Fayose said Mr. Tinubu did the same thing to former Vice President Atiku Abubakar under the Action Congress in 2007.

“That to me is treachery and on this issue of Buhari and the March 28 presidential election, I am saying again that the North should beware!” Mr. Fayose said. “The North should know that Tinubu’s support for Buhari is a Greek gift. Tinubu only wants to corner the economy of Nigeria, using Buhari because he knows that he (Buhari) is weak and even at 41, his military government was ran by his deputy, Tunde Idiagbon.

“Therefore, now that the Almighty Allah has made Tinubu to confess that he traded off Ribadu in 2011, I am calling on our brothers and sisters from the North to beware of this political mercenary.”