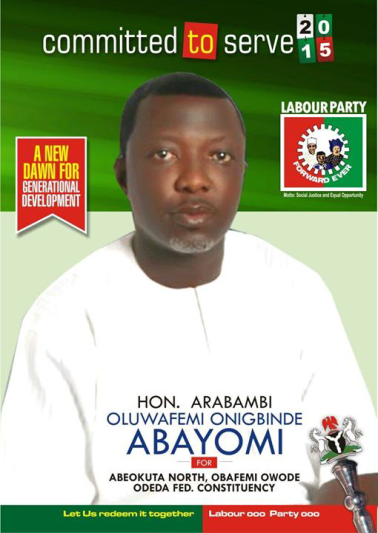 A chieftain of the Labour Party in Ogun State, Abayomi Olufemi, has been arrested by the Economic and Financial Crimes Commission, EFCC, for allegedly issuing dud cheques.

Mr. Olufemi, popularly called Arambambi, was arrested on Friday in Abeokuta.
He is accused of issuing dud cheques three times to his landlord at a duplex located at Adigbe area of Abeokuta.
The suspect, who was eyeing a House of Representatives seat on his party’s platform, was arrested by the police and handed to EFCC operatives.

EFCC had acknowledged a petition against the politician dated December 17, 2014 and since commenced investigations.
The case was earlier handled by the Zone 2 Command of Police in Abeokuta.
“Mr. Abayomi Olufemi issued a UBA cheque number 00000157 with a value of N1.4million only dated 20th December, 2011,” the petitioner told the EFCC. “The cheque whose copy is attached to this letter was lodged for payment. The cheque was returned without any money credited into my account. Another UBA cheque with number 00000224 with a value of N1,4000,000.00 dated 30th April,2014 to make repayment for the earlier bounced cheque of N1,400,000.00 with cheques number 00000157 was given to me by Mr Abayomi Olufemi. The cheque bounced and was also returned after lodgment in the bank. Attached also is a copy of the bounced cheque.”

“Mr. Abayomi Olufemi also gave me another UBA cheque with number 00000225 with a value of N500,000,00 dated 30th September,2014. This cheque was also lodged for payment. The cheque bounced and was returned by the bank without any value credited into my account. Attached is a copy of this bounced cheque.”
The petitioner, Oriyomi Abiodun, however, appealed to the commission for justice. He said the action of the suspect was in violation of the Economic and Financial Crimes Commission Act.
When contacted, the spokesperson of the Ogun State Police Command, Muyiwa Adejobi, confirmed the arrest.

“It is true we arrested him and handed him over to EFCC,” Mr. Adejobi said.

North should beware of Tinubu, he is treacherous – Fayose