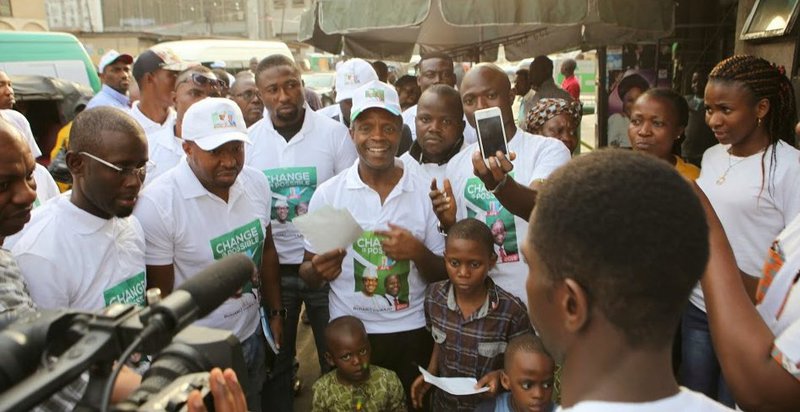 Ahead of the general elections, prices and patronage of polo tops, shirts and face caps have witnessed sharp increases in Lagos markets, a survey by the News Agency of Nigeria has shown.

The election, slated for March 28 and April 11, is believed to be responsible for the sales boom experienced by traders.

Political parties are using the items for their campaign.

Some traders said they had made more sales this season, compared to the 2011 general elections.

They attributed the boom in patronage to the apparent fierce competition between the ruling party and the opposition parties.

The survey showed a marginal increase in the prices of the items.

Prices of wool face-caps also increased from N190 to N200 each while cotton face-cap which previously cost N90 has attracted a N20 increase.

However, the traders blamed the price changes to increase in foreign exchange and high cost of importation.

Ifeanyi King, Director, King and I Forever, dealing in T-shirts, polos and face-caps said, “Everything that happens in the country affects this business.

“The demand for the items is not restricted to a season but throughout the year.

“The churches, schools, organisations and now the political parties use the materials for their campaigns.

“In 2011, the major dealers of these items at Docemo, Idumota and Oluwole Markets were just five, now we have over 20 dealers with every one of us busy.

“The high demand for the items led to the influx of major dealers who are importers of the goods.”

Mr. King stated that patronage from the opposition parties for campaign materials was higher than that of the ruling party.

“There are some colours of polos, T-shirts and face- caps that are not available in the market for the public because we imported them specifically for some political parties.”

Mr. King explained that “If the naira continues to weaken against the dollar, there will be a major increase in price of every good imported into the country, including ours.”

Another trader, Adedolapo Smith, said that foreign exchange rate was a factor that contributed to the price increase of the goods.

“I exchange the naira to the dollar at N215 for the goods that I am selling presently.

“The exchange rate has had a major impact on the business,” she said.

Another trader, Ibrahim Awosanya, said, “I was very happy when the postponement of the election was announced because that means more demand for T-shirts and face-caps in the market.”

A retailer, Evelyn Nwosu, however, complained about the unstable prices of goods in the market.

She said: “Generally, prices of most items in the market are not stable.

“What you bought at N200 in the morning might have increased in the afternoon, talkless of a day or week after.

“The dealers keep attributing the increase to the state of the naira.

“Right now, I am so scared of re-stocking the depleted items in my shop because prices of goods are so expensive in the market.”

I never said I’ll not seek a second term — Jonathan

Buhari will save Nigerian economy as he did in 1983 – APC