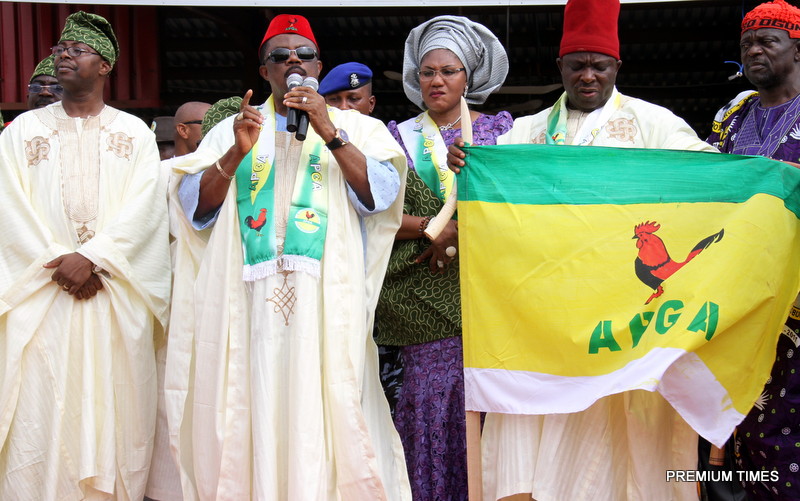 The Governor of Anambra State, Willie Obiano stormed the ancient city of Abeokuta at the weekend with the stalwarts of the All Progressive Grand Alliance, APGA, to present the party’s flag to David Olufemi Bamgbose who is running for the governorship of Ogun State on the platform of the party.

Governor Obiano who was accompanied by his wife, Ebelechukwu Obiano, told a large crowd of party faithful that gathered at the palace of the Alake of Egbaland for the symbolic presentation of flag to the gubernatorial candidate that the arrival of APGA in Abeokuta was an historical event that would usher in a new dawn in Ogun State.

Presenting the party flag to Mr. Bamgbose, a professor, Mr. Obiano said “Today is a great day in Ogun State. It is the day of a political Pentecost. From here, we urge you to go forth and preach the good news of APGA in Ogun State.”

Describing the candidate as a man who was eminently qualified to bring a massive transformation to Ogun State, the governor observed that after mastering the art of purposeful governance in Anambra State in the past nine years, APGA had finally decided that it was time to export its model of governance to other parts of the country.

“APGA has entrenched a remarkable model of excellence in governance in Anambra State for over nine years; now we are exporting the APGA model of governance to other parts of the country because we are a national party. In Ogun State, Professor Bamgbose will fly our proud flag. He will help us to plant the good governance we have in Anambra State here in Ogun State,” Mr. Obiano said while urging the people of the state to cast their votes for Mr. Bamgbose.

Also speaking at the colourful ceremony, the wife of the governor of Anambra State, Ebelechukwu Obiano, urged the Ogun State women to vote for Mr. Bamgbose as he represents the change they are all looking for. Mrs. Obiano who wowed the crowd in flawless Yoruba reminded the people that it was in their power to choose the future they wanted and further emphasized that a vote for Mr. Bamgbose was a vote for a brighter future.

Also speaking at the rally, the National Chairman of APGA, Victor Umeh, told the crowd that APGA had stormed the state to give the people the chance to reposition Ogun State to experience the benefits of good governance.

Comparing Ogun State to Anambra State, Mr. Umeh observed that “Ogun State is known to have produced a lot of giants in education, business and politics. Anambra State has also produced very heavy giants in education, business and politics. Sometimes, when giants clash, they deny the people the chance to experience good governance. And that is what is happening in Ogun State right now – giants are clashing. It also happened in Anambra State but we used APGA to wipe it out. Today, we have a governor who is also a seasoned banker, an accountant, a chartered auditor, a former Executive Director of a bank and now that he is the governor of Anambra State, the story has changed in less than one year. That is what we have come to do in Ogun State. We are presenting to Ogun people, the best man for the job,” he said.

During a courtesy call on the traditional ruler of Abeokuta, the Alake of Egbaland, Adedotun Gbadebo, Mr. Obiano had described his arrival in Abeokuta as a home coming of sorts.

“I am a high Chief in Yorubaland. I am the Otunba Atayeshi of Ilemesho, in Ekiti State and my wife is Erelu Atayeshi. We bring good news to the ancient city of Abeokuta. We are introducing one of your own whom we have found worthy to fly our flag in the coming election,” the governor had explained further expressing the optimism that his visit to Abeokuta would open doors for APGA in Ogun State.

In his response, Mr. Gbadebo had commended Governor Obiano for leading APGA to Abeokuta. “This is a good omen for the country because the right to belong to any association as enshrined in our constitution will never be removed by anybody. You have a right to belong to any association you choose,” the Alake observed and further applauded APGA for offering one of his subjects a sanctuary from where he could seek the electoral support of the people of Ogun State. The traditional ruler also prayed that APGA would grow from strength to strength as it would lend more depth to Nigeria’s democracy.

Responding to all the speeches, the APGA gubernatorial candidate in Ogun State, Mr. Bamgbose predicted that with his entry into the fray, a new dawn was coming upon Ogun State.

“I promise that if by the grace of God I become the governor of Ogun State, I will lead Ogun with the fear of God. I founded the Yelwa College of Education, the first private college of education in Ogun State that has produced over 10,000 teachers. We charge the lowest fees. We shall transfer that model of excellence to governance,” he assured, urging the people to vote for him in the coming election.