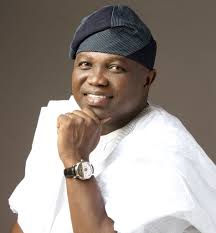 I’m in this race to serve – Ambode

The governorship candidate of the All Progressive Congress, APC, in Lagos State, Akinwumi Ambode, has ​stated​ the reason for putting himself forward for the highest job in Lagos State.

​The candidate says he wants to serve the people of the state.​

In his campaign across different areas of the state, the APC candidate used the entire weekend to reassure supporters and stakeholders as well as woo undecided voters that he is in the race to serve and lead by example.

In a press release signed by his Director of Media and Communications, Steve Ayorinde, Mr. Ambode said Lagos had witnessed a record of excellence service in the past 15 years and the more than 17 million people living and working in this Africa’s largest city-state “deserves a tested hand who will continue in that tradition of excellence.

“The governor that Lagos State deserves at this period of our continued growth and development is a man with a track record of performance and excellence; a man who is tested, who understands governance and is an experienced administrator who will not experiment with the resources and growth template of this state. I, Akinwunmi, Ambode, is that man,” he
assured.
His message of selfless service and leadership by example, according to the release, was the focal point of his eventful weekend.
This was the message he delivered on Friday at the MUSON Centre, Onikan where he was the Special Guest at the 3rd Annual Lecture of the January 9 Collective (J9C), where he spoke to the topic of the lecture, 2015 General Polls: Beyond the Rhetorics of Credible Elections, which was delivered by Cambridge-based professor of Political Anthropology, Prof. Anthony Kila.

According to Mr. Ambode, who is a Fulbright Scholar, selfless service and leadership by example should be the hallmark of an elected official who is desirous of making a meaningful change and lasting impression in the lives of the electorates.

“Selfless service becomes non-negotiable if the process that brought elected leaders into office is free, fair and credible. But often, we see leaders who derail and abandon their promises to the electorates because the process that brought them to office is flawed. They feel they do not owe the voters. This is why we in APC have been very vocal about the need to have a credible election; to have a process that is fair and transparent and to have an election that does not seek to systematically disenfranchise electorates.”

He added that APC would not relent in urging the Independent National Electoral Commission, INEC, to do everything in its power to ensure that all the eligible six million registered voters in Lagos State get their Permanent Voters Cards, PVCs, in order to exercise their civic duties, failing which those with Temporary Voters Card should be allowed to exercise their constitutional rights.

“This is the only way to ensure that INEC’s preparedness is beyond rhetorics so that the February elections can produce leaders that the people want.”

On Saturday, the former Accountant General of Lagos State further reiterated his readiness to serve and continue with the record of excellence in the state when he met with the Zonal Chairman of the Nigerian Union of Petroleum and Natural Gas Workers (NUPENG), Lagos Zone, Comrade Tokunbo Korodo, the National Coordinator of the Civil Society Club of Nigeria (CISOCON), Comrade Babatunde Ashafa, the chairman of the Council of Arewa Chiefs, Alhaji Sani Kabiru and a group of senior citizens representing top retired civil servants in Lagos State who met with him at different times at his Gbagada campaign office.

It was the same message of selfless service and equal opportunities for every resident of Lagos State that Ambode delivered at the Teslim Balogun stadium in Surulere when he held a rally for thousands of people with physical disabilities on Saturday afternoon.

“Our administration will not discriminate. We will look after your welfare,” he assured the tumultuous crowd who identified with his touching recognition of the special needs of people with physical disabilities. “Irrespective of your tribe, creed, religion and physical disability, the APC government will look after you and recognize your rights,” he assured the people in company with his running mate, Oluranti Adebule.

Mr. Ambode also proved to be a people’s man when he rode in the BRT bus on Saturday evening from Ketu to Fadeyi, after a visit to the popular Mile 12 market in mainland Lagos to preach the message of a government of inclusion. The informal sector as well as the transport sector, he emphasized , are an integral part of the development of Lagos State, “and they deserve the government’s attention and unflinching support at every given time.”

The APC candidate also reiterated his plans for sports development when he spoke at a charity football march in Ikorodu on Sunday afternoon, organized to drum up support for his gubernatorial ambition. He used the occasion to explain his T.H.E.S.E plan which as part of his campaign manifesto emphasizes the harnessing of Tourism, Hospitality, Entertainment, Sports and Excellence to get the teeming youths of Lagos State engaged in those areas.

“Our vision is clear about the direction that Lagos State should face after 15 years of solid foundation and progress. And this is what our campaign is all about. We must consolidate and build on the achievements of the past administration of Asiwaju Bola Tinubu and the incumbent actualiser, Babatunde Fashola, SAN. Lagos deserves excellence through a combination of requisite experience and selfless service. Lagos does not depend on sharing of oil revenue any longer.

“Lagos is creating an enabling environment for businesses to thrive and for citizens and corporate sector to pay their taxes. Sports, entertainment and tourism are goldmines waiting to be tapped and taken to the next level in Lagos State. This is no time to experiment with the future of our state and we are convinced that the majority of Lagosians appreciate that fact,” Mr. Ambode stated.