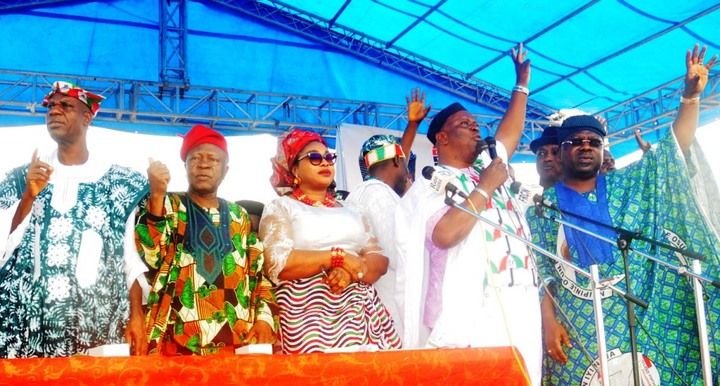 “I want to assure you that the mandate that was taken through the back door will come back to PDP.”

Vice President Namadi Sambo has said that the Peoples Democratic Party, PDP, will reclaim Osun State, which was taken “through the back door’’ by the All Progressives Congress, APC.

Mr. Sambo spoke on Wednesday in Abuja at a meeting of the PDP National Campaign Committee for the Osun State governorship election scheduled for August 9.

The meeting, according to the vice president, is to mobilise and strategise on how the ruling party will win the election.

“I want to assure you that the mandate that was taken through the back door will come back to PDP, as it was seen after the election in Ekiti State.

“The people will now have the chance to choose for themselves, where they belong, which is the PDP,’’ he said.

The vice president, who spoke before the meeting went into close door, added that the PDP was prepared to repeat the victory it recorded in the June 21 Ekiti governorship election.

“We all know that Osun belong to PDP, those people there now, never went through a successful election,’’ he said.

He also assured that the committee, which he chaired, would continue to work diligently to ensure the principle of “one man one vote” preached by the president.

The Chairman of PDP Board of Trustees, Tony Anenih, and the Special Adviser to the President on Political Matters, Rufai Alkali, were among those who attended the meeting.

Others were the Deputy Speaker of the House of Representatives, Emeka Ihedioha; Ebenezer Babatope; and Minister of State for Federal Capital Territory, Olajumoke Akinjide.