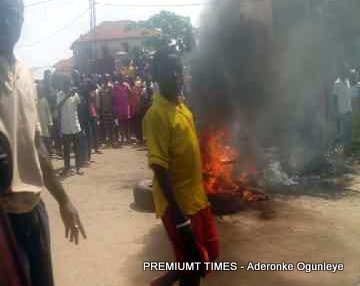 The man was found with the head and torso of a dead baby.

There was jungle justice on Ado Road, Ikere Ekiti on Sunday morning when a middle aged man was burnt alive to ashes.

A witness told PREMIUM TIMES that the late man was caught with a three year old baby with its hands and legs cut off.

An okada man who simply identified himself as Ade told PREMIUM TIMES that the man was a ritualist. “We caught him with a missing child. Inside his bag was the dead baby. The hands are legs were missing already, the people pounced on him and burnt him to death.”

Another witness said, “He told us that he came from Ibadan. He confessed that a politician sent him to come and steal a child and he has carried the baby since yesterday but had to cut the hands and legs for rituals.” 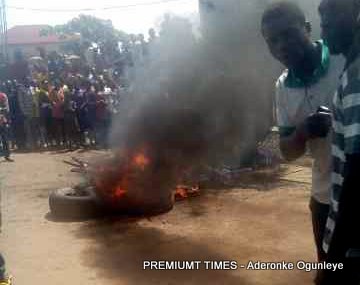 No policeman or security man was seen on the scene of the event except an angry mob.

Another witness said policemen were not necessary as, according to him, they would collect bribe and free the alleged ritualist. “We cannot take him to the police station because the politicians that sent him will free him after collecting bribe. This will serve as a lesson to other people that intend to come to Ikere Ekiti for such an act. They should stay away from this place or else we will kill them.”